“Eternals” is a very different type of Marvel Studios movie. With its somber tone and mythological grandeur, in many ways it is closer in spirit and aesthetic to a dour DC movie than anything the MCU has produced before. And along with that shift in style, “Eternals” could have deeper implications for the Marvel Cinematic Universe and its galaxy of heroes.

No matter your feelings on “Eternals,” you can easily acknowledge one thing: it is different. While there are a handful of jokes (including that cursed “Fall collection, IKEA” line that has played in every trailer for months), and we do love the Harish Patel as Karun, Kingo’s valet/documentarian, the jovial atmosphere of most Marvel movies is replaced by something contemplative and earnest. This is one of the few Marvel movies that doesn’t leave you with a buzzy sugar high. Instead, it is asking you to wrestle with the moral implications of a race of super-beings who are programmed to protect human life but to not interfere against looming catastrophes, and to appreciate the dazzling minutia of everyday existence.

Marvel movies have sometimes you wrestled with weighty themes or heavy subject matter, but all have done so with a lightness of touch that “Eternals” is noticeably missing. “Endgame” plumbed the depths of depression following the erasure of half of the world’s population, particularly in its first half, but still had time to make jokes about Rocket eating garbage. “Black Panther” made the African diaspora and the legacy of slavery and colonialism central to the story, but paused to make fun of the superhero’s choice in footwear. There are jokes in “Eternals,” to be sure, but they are almost always in the background; an essential but muted part of the tapestry.

The fact that “Eternals” chose a tone so different from the rest of the Marvel Cinematic Universe is, in and of itself, cause for celebration. Hopefully this means that, going forward, movies produced in this franchise won’t be so handcuffed to the tone established by the pre-“Eternals” movies. Could movies going forward be even more serious? (Can you imagine an entirely joke-free Marvel movie?) Or could they be an out-and-out comedy? What about a true suspense-filled thriller? The malleability of the Marvel Cinematic Universe, as we’ve seen with some of the shows that have premiered on Disney+, has been underestimated for some time. The “Eternals” might have broken those preconceived notions for good. 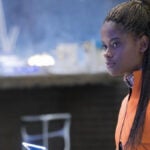 The MCU Is Going Even Deeper Into Space

“Eternals” is, intermittently, a space opera. In fact, it’s probably the Marvel movie, after the “Guardians of the Galaxy” movies (and stretches of “Infinity War”), to spend the most time in outer space. The cosmic side of the MCU is something that has been teased endlessly over the years (at one point “Guardians of the Galaxy” director James Gunn had been hired to oversee a whole slate of projects that originated from this idea; his unceremonious dismissal and rehiring seems to have canceled that idea), but few projects have actively engaged with it the way “Eternals” has. Hell, “Loki” was supposed to take place across vast stretches of time and space but wound up being a workplace comedy mostly set in an office building.

With “Eternals” having large sections of the narrative set in space, where our heroes get orders from an otherworldly titan and cruise around in a giant, steely spaceship, it gives audiences hope that Marvel Studios will start to more actively engage with that side of its storytelling. This will undoubtedly be the case with a new “Fantastic Four” movie on the way from “Spider-Man: Homecoming” director Jon Watts and whatever cosmic doors the continued obsession with the multiverse opens up. The point is: “Eternals” brought us back to space and has allowed it to be more than just the place where the sentient tree hangs out.

It’s always fun when Marvel Studios dips back into its own past. Even “Black Widow,” which took place shortly before the events of “Infinity War” was a ton of fun. (Especially when you realize Scarlett Johansson is wearing Florence Pugh’s many-pocketed vest throughout “Infinity War.”) What “Eternals” presents, though, is something more profound – an entirely separate narrative, starting before the Marvel Universe as we know it began and running in parallel to the stories that have thrilled us for the past couple of decades. This begs the question – how many other narratives are out there? 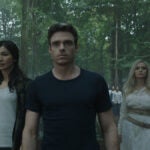 Could we see Marvel movies that take place in the past but on other worlds or in parallel dimensions or timelines, running alongside the narrative that we already know and love (and has been established across more than two dozen movies)? And are there characters that we may have encounter before that have had run-ins with the Eternals? It’s a tantalizing possibility, and one that allows “Eternals” to expand what we know of the MCU in both time and space. We know that our heroes have gotten into further adventures than the ones that showed up in the MCU, and this kind of backtracking (potentially in alternate timelines) would allow for those adventures to be exploited. Just think of how advanced the digital de-aging technology will become!