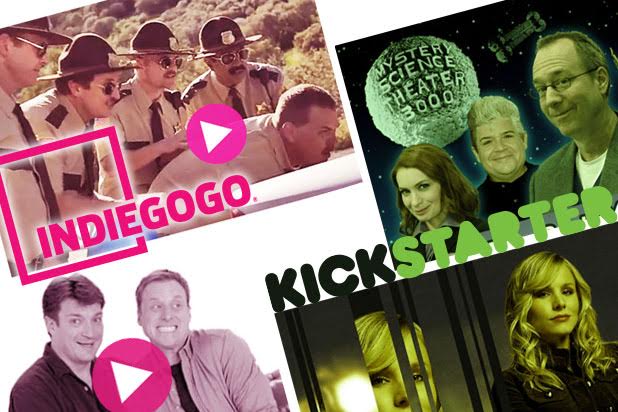 Walking away from the Sundance Film Festival this week, film buffs could tally their scoresheets and conclude that Kickstarter is still top dog in crowdfunding, with 16 films accepted versus Indiegogo’s three.

They’re right — but things can change.

Through a combination of outreach, fierce competitiveness and an open-arms acceptance of all kinds of projects, Indiegogo is closing the gap on its bigger rival.

Overall, Indiegogo’s total funds raised last year grew by more than half, while Kickstarter’s were up about 30 percent.

The funny thing is, Kickstarter doesn’t seem to mind.

Kickstarter remains on top with more than $2 billion total pledged to Indiegogo’s $800 million as of December.

It’s unclear just how much Indiegogo’s film and video business has grown. Wednesday the head of Indiegogo’s film team, Marc Hofstatter, said it jumped 123 percent last year. The following day he said that percentage was wrong but declined to give another number.

Kickstarter’s growth, on the other hand, stopped dead. Total dollars pledged to film and video fell, dropping about 2 percent.

Why the shift? On the surface, the two crowdfunding sites seem similar. Both let people with a creative aspiration turn to fans for direct funding. Both extract a 5 percent fee on funds raised.

But they approach that goal very differently.

Kickstarter is half do-gooder, half hipster. Its structure as a public benefit corporation means advancing a social good must be a business goal. It narrowly defines the kinds of projects it accepts. Any creative work is kosher, including films, paintings or gadgets. But Kickstarter won’t permit, for example, projects making a health claim, or charity fundraising.

A campaign for “caffeinated toothpaste, or my dog’s dental surgery” wouldn’t provide much uplift to artistic projects that also appear on the site, Kickstarter spokesman Justin Kazmark told TheWrap.

Indiegogo is more like a Craigslist of crowdfunding. It accepts more kinds of projects, allowing things like charitable giving, and it offers flexible funding options.

“If we wanted to be another bank or another gatekeeper or another studio, we would decide what would go” on the platform, Slava Rubin, Indiegogo’s former CEO, told TheWrap.

But Indiegogo also fits the mold of the growth-hungry tech start-up. It has raised at least than $56.5 million from venture capital funds, including a $40 million round last year, with the ultimate aim of growing bigger to provide a return on investment. By comparison, Kickstarter raised $10 million five years ago and stopped here. Its founders have been vocal that a big sale or initial public offering doesn’t interest them.

And when a big-name project is up for grabs, that’s when the personality contrast between the two begins to really emerge.

“Kickstarter was second to the party, but they are perceived by everybody as the first position. They’re like the Kleenex versus everybody else being tissues,” said Ivan Askwith, a crowdfunding consultant who has helped campaigns on both platforms, including a sequel to the movie “Super Troopers” on Indiegogo and the film continuation of TV series “Veronica Mars” on Kickstarter.

Indiegogo, he said, reminds him of the motto of car-rental company Avis. “We’re No. 2, so we try harder,” he said.

For high-profile projects, Indiegogo has offered discounts on its 5 percent fee as an incentive, people familiar with the matter told TheWrap. They spoke on condition of anonymity because the terms of the deals are private.

In a statement, Indiegogo said its pricing was competitive and in line with industry norms. “Indiegogo is winning in film because aspiring filmmakers know we have the most effective community-building and fundraising tools at competitive pricing that is based on industry-wide practices,” it said.

Kickstarter doesn’t provide discounts on a project-by-project basis, spokesman Kazmark said, with the exception of alums of the Sundance Institute, a nonprofit that supports filmmakers and artists. Kickstarter has a longstanding partnership with institute, and the company cuts 0.5 percentage points off its rate for those alums.

Kickstarter still enjoys a stronger brand perception, but there are hints that is beginning to change too.

“Kickstarter is currently seen to meet expectations better than Indiegogo in the crowdfunding category, but Indiegogo is beginning to catch up,” said Robert Passikoff, founder of brand loyalty and consumer engagement research firm BrandKeys, who relied on data from its Customer Loyalty Engagement Index.

He said that trend likely stems from more brands entering crowdfunding and pulling consumer loyalty in new directions. Crowdfunding has grown to include companies like GoFundMe, Patreon and Seek & Spark.

For creators, though, the rivalry has little interest.

The producers behind web series “Con Man,” which raised more than $3 million on Indiegogo, said they simply went with the platform and team that felt right to them.

“We’re very happy that they believed in us,” said actor Alan Tudyk, who wrote, starred and directed the series. PJ Haarsma, who executive produced the series alongside Tudyk and actor Nathan Fillion, said he was attracted to Indiegogo’s hands-on approach to making the campaign successful.

For the record: An earlier version of this story reported Indiegogo’s film growth in 2015 without disclosing the company later disputed its own number, and misidentified Slava Rubin’s title. It also included incorrect numbers for Kickstarter’s successfully funded film/video campaigns last year and Kickstarter-backed films in the Sundance Film Festival.