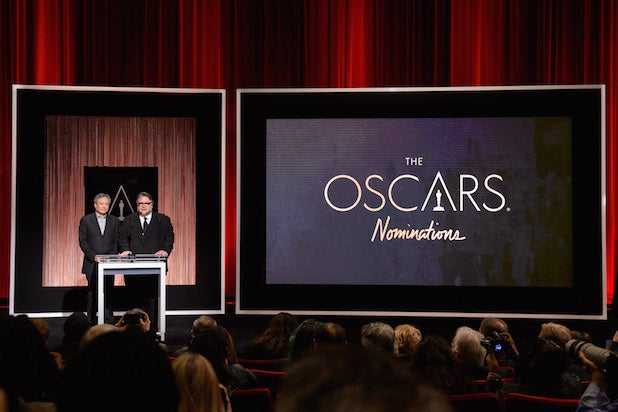 Now that the Academy of Motion Picture Arts and Sciences has compiled its new branch count for the 2016 awards season, we know how many people are eligible to vote for the upcoming Oscars: 6,687.

And now we can figure out how many votes it’ll take to get a nomination — which, in most of the 24 categories, is a fairly small number.

Because of the Academy’s preferential system of counting nomination votes, and because AMPAS restricts Oscars voting in most categories to members of the appropriate branch, you can land a nomination with less than 100 votes everywhere except Best Picture and the four acting categories.

(And in one category it’ll only take seven votes, but we’ll get to that later.)

Also Read: Will the Oscars 'In Memoriam' Be the Biggest, Saddest Ever?

Mind you, we’re talking about first-place votes here. Under the preferential system, a voter typically lists his or her top five choices in order of preference — but the vote only goes to the film ranked first on each ballot, unless that film has already secured a nomination or been eliminated from contention.

In that case, the ballot will count for the voter’s second choice, or for the highest-ranked film on the ballot that’s still in the running.

Oscars nomination voting begins on Thursday, Jan. 5, and continues through Friday, Jan. 13. Here’s the breakdown of what it’ll take to land a nomination in each category:

Best Picture
The entire Academy membership, 6,687, is eligible to vote in this category. In the first round of voting, if they all vote, 608 votes will guarantee you a nomination.

(You get that number by dividing the number of votes by the number of potential nomination slots, 10, plus one, and then rounding up to the next whole number. The math: 6687 divided by 11 equals 607.9, which is rounded up to 608.)

Best Director
There are 473 voters in the Directors Branch, and five slots for nominees. That puts the magic number at 79 votes.

Best Animated Feature
The Short Films and Feature Animation Branch has 479 members, which would normally mean that 80 votes would guarantee a nomination. But Oscars voting in this category is only open to members of the branch and volunteers from other branches who have seen at least 18 of the 27 eligible films in theaters. They score all the films, and the five with the highest scores are nominated.

Best Costume Design
Costume designers don’t make up the Academy’s smallest branch — that distinction goes to casting directors — but with 117 members, they are the smallest branch that votes for its own award. (There is no casting category at the Oscars.) So a costume design nomination takes fewer votes than any other category: 20.

Best Documentary Feature
After a first round of voting narrows the field to a 15-film shortlist, the 277 members pick their five favorites. If they all cast ballots, it’ll take 47 votes to be nominated.

Best Documentary Short
The same 277 members of the doc branch are eligible to vote once the contenders have been narrowed to a 10-film shortlist by special committees. It’s unlikely that everyone in the branch will watch the eligible shorts and vote — but if they were to do that, the magic number would again be 47.

Best Film Editing
This is one of five categories with a magic number in the 40s. With 274 members of the Film Editors Branch, you need 46 votes.

Here’s why: Several hundred volunteer members from all branches of the Academy watch and score all the eligible films; their top six choices make the shortlist, augmented by three additional choices from an executive committee. Then three hand-picked phase-two committees — 20 people in Los Angeles, 10 each in New York and London — view all the shortlisted films and vote for their favorites.

Those phase-two committees then vote by secret ballot for their five favorites. And because there are only 40 members voting in this round, the magic number is, yes, seven.

Best Makeup and Hairstyling
The fact that the category only has three nominees helps counterbalance the fact that the branch only has 157 members. Voting is restricted to members who attend a special presentation of clips, or members who have seen all seven shortlisted films. If every member of the branch participates in one of those ways, it would take 40 votes to secure a nomination.

Best Original Score, Best Original Song
The Music Branch consists of 279 members, which puts the magic number for a nomination at 47. But there is one potential exception, because a branch rule prohibits more than two song nominations from any film. So if one of the films that submitted more than two songs — this year, that  means “La La Land,” “Believe” and “What Happened Last Night” — has three songs to hit the magic number, the third song to do so will be disqualified.

Best Production Design
The branch has 295 members, so 50 votes are required for a nomination.

Best Visual Effects
Leave it to the VFX wizards to make Oscars voting even more complicated than it already was. There are 383 members of the branch, which would mean a magic number of 64 if they calculated nominations the way most of the other branches do. But instead of the preferential system, the Visual Effects Branch uses “reweighted range voting,” which uses numerical scores and lots more math.

Best Animated Short, Best Live-Action Short
The Short Films and Feature Animation Branch has 479 members. All of them are eligible to score the qualifying films to determine two 10-film shortlists, and also eligible to attend screenings of the shortlisted films in each category. Members who have seen all of the shortlisted films can cast nominating ballots – in the unlikely event that the entire branch participates, that would mean a magic number of 80 votes. (But in reality, it’s likely far lower.)

We’ll know who reached the magic numbers on January 24. The Oscars will take place on February 26.