Sorry Smart Hulk, it is officially a Hot Hulk Girl Summer. After months of rumors finally got confirmed this week, Megan Thee Stallion made her MCU debut in episode three of “She-Hulk: Attorney at Law.” And as they say, it took a village to make it happen.

How exactly did Megan Thee Stallion get folded into the “She-Hulk” plot naturally? Well, in the episode, we find out that Dennis, Jen Walter’s gross former colleague, has been dating a woman he met online, who he fully believes is Megan Thee Stallion — because of course he thinks he can land someone like Meg. But in reality, he’s actually been catfished by a shapeshifting Asgardian who took all of his money while pretending to be Megan Thee Stallion.

Naturally, Dennis wants to recoup the hundreds of thousands of dollars she stole. And in the end, he wins — much to the delight of the actual Megan Thee Stallion. Sitting in the back of the courtroom, she reminds everyone that there’s only one true Megan, and that she can’t be imitated.

According to Jessica Gao, the head writer and executive producer on “She-Hulk: Attorney at Law,” the idea of even attempting to get Megan Thee Stallion came because Maslany is such a huge fan. But the reason they were actually able to reach the rapper was because of Jameela Jamil, who plays Titania on “She-Hulk.” 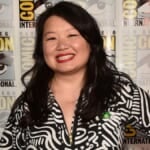 “It was because Jameela Jamil knew her personally from working on ‘Legendary.’ And so when she brought her up, we were like, ‘Wait, can that — is that real? Can that really happen?'” Gao recalled to TheWrap. “And because Tatiana is an incredible dancer, I wrote that extra little scene last minute, that little tag where they dance together, and hopefully it’s one of the happiest days of her life because she, I mean, she was dancing with one of her favorite people on Earth.”

Indeed, Megan pops up one more time at the end of the episode, twerking alongside She-Hulk in her office. And no, Tatiana Maslany still hasn’t recovered from that moment.

“It is the greatest joy of my life, truly one of the highlights of my entire existence on the planet,” Maslany told TheWrap. “I’m such a huge fan of hers. And when I found out this was happening — Jessica Gao told me, I think she told me like three days before it was gonna happen. Because she was like, ‘I don’t want you to be in a catatonic state for two weeks. If I had told you this too early, we would not have gotten any filming done.’ So it truly was the greatest. She’s amazing. She’s a queen.”

Maslany’s joy is something director Kat Coiro also remembered clearly — but so was Maslany’s dancing.

“It was an incredible moment for all of us to see Tatiana’s genuine excitement at having Megan on set,” Coiro said. “Actually, this is another little instance where her excitement led to that scene being created, because everybody knew how excited she was. And what we discovered when they started dancing is that Tatiana can twerk with the best of them. And again, it’s a CGI character, so you might think the twerking is manipulated. It is not. That is all Tatiana. She’s amazing.” 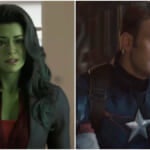 Also Read:
‘She-Hulk’ Revealed Captain America’s Sex Life Because the Writers Debated It as Much as Fans (Video)

To that, Maslany can only shrug.

“Like I said, I’ve dreamt of that moment. And so I had trained,” she said. “There was years of training”