“She-Hulk: Attorney at Law,” which just debuted on Disney+, is arguably the most delightful Marvel Studios series yet. Created by Jessica Gao and starring Tatiana Maslany as the lawyer-turned-superhero, “She-Hulk” is effervescent and refreshing, a balmy tonic after the darkness of “Doctor Strange in the Multiverse of Madness” and other, more somber Marvel Studios productions.

Most of this is due to Gao, whose sensibilities are so perfectly suited for the character that you’ll wonder why she hadn’t done a Marvel project before. As it turns out, she tried.

In fact, “She-Hulk: Attorney at Law” was spawned, in part, from a pitch she made to Marvel Studios for the “Black Widow” movie. When TheWrap asked her about the pitch, she was reluctant, in case she wants to use elements of it for a future project. But she described it in broad strokes.

“It was basically a ‘Grosse Pointe Blank’ story for Black Widow,” Gao said. “Basically you find out that in high school, as a teenage spy/Russian agent, she was planted at an American high school, because she had to assassinate someone’s dad and then 20 years later, she goes back to the high school reunion and has to deal with the fallout of this fake identity where she betrayed all these people in high school.”

How great does that sound?

Gao met with Marvel Studios on a couple more movies (“Captain Marvel” and “Shang-Chi and the Legend of the Ten Rings”) and while she never got them, it led to two things: “She-Hulk: Attorney at Law” and Gao’s merciless trolling of Marvel Studios president and one of the most powerful people in Hollywood, Kevin Feige. 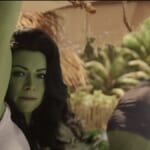 “I’m a big believer that every opportunity you miss is actually setting you up for something else,” Gao said. “I truly believe that I didn’t get any of those three Marvel movie jobs because it was building to this point. Because what it really did for me is every single time that I pitched to Kevin, and Lou [D’Esposito] and Victoria [Alonso], and Brad [Winterbaum], I get to spend an hour with him, and I get to shoot the shit and hang out and chat. Then I get to pitch my movie. Then, of course, they wholeheartedly reject me. But every time I would go in to pitch, it was like, ‘Oh, hey, what’s up? Is it the time of year where you reject me again? Cool. What have you been up to since you rejected me?’ It just really made the room very warm.”

Gao continued: “Each time, they got to know me more, I got to know them more. By the time I came into pitch ‘She-Hulk,’ I think they had a very good sense of what my sense of humor was. They had a good sense of what type of writer I was, what kind of story I built. They just had a very good indication of what I’m about. I think that that really helped sell it, because they weren’t coming into me cold. They already talked to me so many times, they understood the quirks and nuances and the little things that I really infuse into everything.”

This was also, she admits, where her trolling of Feige was first established. The running joke was meant to crescendo a few weeks ago at San Diego Comic Con, on stage at Hall H.

“I wanted to get a classic Kevin black baseball hat that said ‘Kevin Sucks’ on it. I was going to wear it backwards when I came onto the Comic-Con stage, so nobody saw what it said,” Gao said. “The first time I got asked a question, I would first Sylvester Stallone-in-‘Over The Top’-style, turn it back around so that everybody could see that it says ‘Kevin Sucks.’ Then just not talk about it and answer the question. Then I’d present the hat to Kevin.” 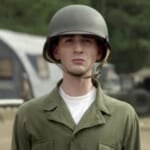 Also Read:
Chris Evans Seems to Have Found Out About Captain America’s Virginity During ‘She-Hulk’ Along With Everyone Else

When she told Feige about it, he suggested that instead of a baseball cap, she should wear one of her trademark jumpsuits and have ‘Kevin Sucks’ embroidered across the back.

“If I had time, I absolutely would’ve found an embroiderer to custom embroider Evel Knievel-style, ‘Kevin Sucks’ across the back of my jumpsuit and I’d strut out on stage and then I’d do a spin. Then with my back to the audience, just point with my thumbs,” Gao said.

Still, she said that her good-natured ribbing of Feige is “100% our dynamic in person” and that the Comic-Con story says a lot about who he is as a person and his inability to take himself too seriously.

“I feel like that Comic-Con story really illustrates what a great creative producer Kevin is, because he goes with everything,” Gao said. “He has no ego. He’s always trying to plus it. He’s a great improviser, because always ‘yes-anding’ you. But not only was he going to go along with the ‘Kevin Sucks’ hat, but he plussed it and made it better, which is really why he is so good at what he does, because that’s what he does for everything. The other thing I respect about him is he is probably one of, or if not, the most powerful man in Hollywood and he lets me bully him mercilessly like we’re cousins.”

We’ll have more from our longer chat with Gao. New episodes of “She-Hulk: Attorney at Law” premiere every Thursday on Disney+. 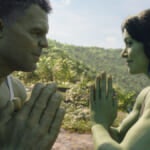 Also Read:
When Is ‘She-Hulk: Attorney at Law’ Set in the MCU Timeline, Exactly?
x