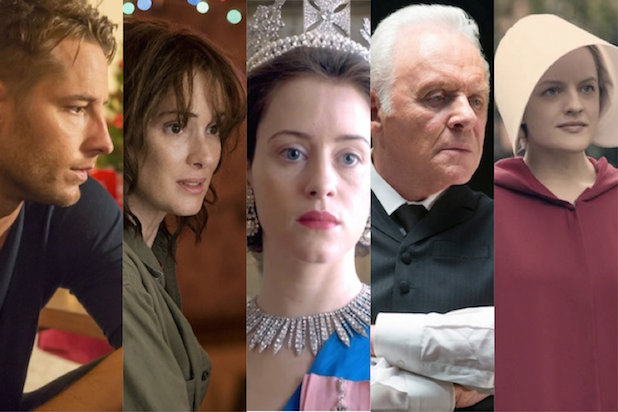 With one week left in the initial round of voting, we could be in for some landmark nominations for the 69th Primetime Emmy Awards. Sure, “Saturday Night Live” will break and extend its own record for the most nominations ever for a television program, and “House of Cards” will do the same for its record as the most-nominated streaming series.

But beyond that, the class of 2017 could shake things up in other ways. We won’t know until nominations are announced on July 13 — but as we count down to the end of Emmy nomination voting on June 26, here are three possibilities for notable things that could happen:

If there’s one thing we’ve learned about Emmy voters over the years, it’s that they need to get to know you, particularly in the marquee Outstanding Drama Series category. First-year shows land nominations at a rate of about one a year — 11 have done so in the last decade, 16 in the 17 years since the turn of the century — and you’ll virtually never see more than two freshman shows nominated in the same year.

But if you look at this year’s predictions from most Emmy experts, the Outstanding Drama Series lineup could easily include five first-year shows: “The Crown,” “Stranger Things,” “This Is Us,” “Westworld” and “The Handmaid’s Tale.” Others, including “13 Reasons Why,” “The Good Fight” and “American Gods,” also having a fighting chance to make the top seven (or eight, in the event of the Emmys’ two-percent rule that can be used to expand the field).

If it happened, that would be an all-time record: In the 68 years of the Emmys’ existence, the category (or its predecessors) has never seen five new shows nominated in the same year.

In fact, it has been 55 years since the category had more than two new series nominated at the same time. The last time it happened was 1962, when four rookie shows – “The Defenders,” “Alcoa Premiere,” “Ben Casey” and “The Dick Powell Show” – were among the six nominees in the Outstanding Achievement in the Field of Drama category.

It’s hard to imagine that five new shows will be embraced by voters from the same Academy that made “Breaking Bad,” “The Americans,” “The Practice,” “Friday Night Lights,” “Grey’s Anatomy,” “The X-Files,” and “Law & Order” wait for one or more seasons before they received their first series nominations.

But “The Crown,” “Stranger Things” and “This Is Us” seem to be near-shoo-ins, with “Westworld” and “The Handmaid’s Tale” serious players as well. And they benefit from the fact that two of last year’s seven nominees in the category aren’t in contention this year: The new season from HBO’s Emmy champ “Game of Thrones” was delayed until after the eligibility cutoff, while “Downton Abbey” has ended its six-year run.

Still, to tie the record set in 1962, two more of last year’s nominated shows — “The Americans,” “Better Call Saul,” “Homeland,” “House of Cards” and “Mr. Robot” — would have to fall out, which could be a tall order considering how Emmy voters have long been creatures of habit.

But the heat is with the newbies, and a landmark of some sort seems likely.

(By the way, the Emmys’ Outstanding Comedy Series category has been slightly more receptive to new shows, with three rookie nominees in 1962, 1966 and 2010, four in 1971 and 1983, and all five in 1970. But this year, “Atlanta” could well be the only freshman show to land a nom, unless “Insecure” or “Dear White People” have more clout than we realize.)

Also Read: 'Atlanta,' 'This Is Us' and 'Handmaid's Tale' Lead TCA Awards Nominations

2. Netflix sets a new record for streaming nominations, and finishes second (or even, gasp, first) in total noms.

First, let’s deal with the last of those possibilities. There’s no reason to think that HBO will slip much from its usual 90-plus nominations, and it would be staggering if Netflix could increase its total number of noms by 75 percent to seriously challenge HBO, the network that has finished with more nominees than any other network for the last 17 years in a row.

But Netflix has a real shot at finishing second. Last year, the streaming service landed 54 nominations, which was 40 short of HBO but still enough to beat every other streaming platform put together, and to top every other network except HBO and FX, which edged Netflix by landing 56 nods.

This year, Netflix has more shows in the running than ever before – more than three dozen series and limited series, plus children’s shows and documentaries and specials – and it has spent more money campaigning for them. It’ll be a surprise if they don’t pass FX to become the second-most-nominated platform.

3. A broadcast network gets back into the Outstanding Drama Series category for the first time in six years.

In the 20th century, the most prestigious Emmy category — like all the other categories — was the undisputed province of NBC, CBS and ABC, which dominated the nominations and won almost all the awards. The fourth broadcast network, Fox, nudged itself into the mix in the mid-1990s. But HBO showed that pay-cable was a threat with “The Sopranos” in 1999, and within five years the networks were routinely outnumbered.

In the last 10 years, only four broadcast-network shows – ABC’s “Boston Legal” once, Fox’s “House” and CBS’ “The Good Wife” twice each and ABC’s “Lost” three times – have been nominated. The last broadcast nomination in the Outstanding Drama Series category was for “The Good Wife” in 2011; since then, five years and 32 nominations have omitted broadcast entirely.

The streak was supposed to end in 2015 with a nomination for Fox’s sensation “Empire,” but that show was notably bypassed by voters. Now there’s another great hope for broadcast: NBC’s “This Is Us,” which just about every pundit thinks is a sure thing.

It probably is — but then again, many of those pundits thought the same thing about “Empire.” Don’t count your chickens quite yet, broadcast fans.

Emmy Showdown: 46 Actors Competing Against Themselves, From Melissa McCarthy to Jimmy Smits (Photos)

In an already crowded Emmy race, some actors have submitted themselves as many as four times in the same category (we're looking at you, Maya Rudolph) -- which means they can look in the mirror to find what's