The new film “Nomadland” has been universally praised for its sensitive, authentic portrayal of Americans living in the gig economy, traveling from place to place while working seasonal jobs in factories, farms and even at Amazon fulfillment centers.

And Amazon has a small supporting role, playing itself, in the movie. Cinematographer Joshua James credits the film’s star, Frances McDormand, with landing the online retail giant’s permission to allow his cameras inside. In the film, the Oscar-winning actress stars as Fern, a widow affected by the great economic collapse of 2008, who travels through the American West in her Ford Econoline van. And, yes, she takes on a temporary job packaging products on the Amazon assembly line.

“Fran wrote a nice letter to Amazon to ask them if we could do it, and they said yes,” Richards told TheWrap. “It’s great that we show Fern working in an actual Amazon packaging place.”

As the film has been screened at numerous film festivals since September (it won the top prize at Venice, among other accolades), McDormand revealed that she indeed wrote to Amazon’s senior VP of business and corporate development Jeff Blackburn, explaining the story that director Chloé Zhao (the director of 2017’s sleeper hit “The Rider”) was planning to tell. 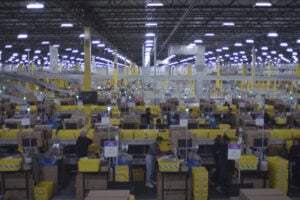 A shot inside the Amazon warehouse in “Nomadland” (Searchlight Pictures)

The film, based on Jessica Bruder’s nonfiction book “Nomadland: Surviving America in the Twenty-First Century,” chronicles the unrooted lifestyle of various people, several of whom play themselves in the movie. Those include Linda May, the driving force of Bruder’s book, who meets McDormand’s Fern while working at an Amazon fulfillment center. The film’s story begins as Fern is arriving at a seasonal job through Amazon’s CamperForce, a program that connects RV campers and nomadic travelers with job opportunities at the company’s warehouses.

“They were totally accommodating, and Fran did real work, taping up boxes while we were there,” Richards explained. “They had read the book and they pretty much knew what we were doing with the film. I think they knew it wasn’t a film about them. It’s about the people.”

The presentation of Amazon in the film is matter-of-fact, neither a celebration nor a condemnation of the retail giant. “It’s a weird argument to say that the movie is making a big critical statement,” Richards said. “I mean, we simply show Fern working there. We also show a Ford Econoline as well, but I don’t think we’re making a big critical statement about Ford. Obviously, you can find politics in anything.”

Richards is credited as the film’s production designer as well cinematographer. “Nomadland” is his third collaboration with Zhao, whom he met while they both were attending New York University’s film school. He explained that the aesthetic of the film were dictated by many of the shoot’s limitations. And the fulfillment center was one of his easier locations to shoot.

“I can say that the Amazon warehouse totally fell right into our color palette,” he said with a laugh. “Oh, I was delighted. Great lighting. Nothing really needed from me there, seriously.”

He also is pleased that certain inequities experienced by nomadic laborers like Fern have been addressed since Bruder’s book was published. “The pay has gone up, so it’s a bit better,” he said. “Some problems have been addressed, I’m sure there are still others. But they employ these people, these nomads that you see in the film. Amazon is part of our modern landscape, so it’s also a valid piece of the movie. And a valid conversation that we all need to keep having.”