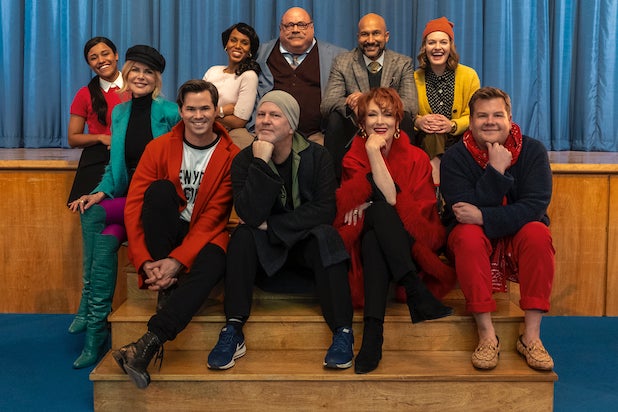 Meryl Streep was always on Ryan Murphy’s bucket list of people he wanted to work with, but the prolific producer and director didn’t have a role for her until he went to a Broadway performance of the musical “The Prom” in January of 2019. But when he saw the show by Matthew Sklar, Chad Beguelin and Bob Martin, Murphy immediately wanted to turn it into a film, and to cast Streep in the lead role of Dee Dee Allen, a fading Broadway star who cynically tries to revive her career by heading to Indiana to lobby for a teenage girl who was barred from taking her girlfriend to the high school prom.

“I went to see it as a fan and walked out of there saying, ‘Wow, I really want to make this,'” Murphy told TheWrap. “So I came up with a murderer’s row of people I’ve always wanted to work with, chief among them Meryl.” Once the other actors said yes, which took about two weeks, he approached Streep.

“She said yes instantly,” he said. “I was surprised, as anyone would be. But I think all of them wanted to do it because first of all it was a challenge to do something that big, with singing and dancing and acting. But also, it was about something, and it felt joyful. And we were all feeling the same thing – all of us had come off of making darker things, and I think we wanted to make something lighter and happier.”

Murphy used Gene Kelly and Stanley Donen’s “Singing in the Rain” as a model for what he wanted to do, and his cinematographer, Matthew Libatique, studied classic models as well. “He had just come from doing ‘A Star Is Born,’ which was a rock ‘n’ roll musical,” Murphy said. “But he was obsessed with old Broadway musicals – what is the vernacular, and how does the camera move? We all wanted to make a valentine to old-school movies that we loved.”

The actors, he added, “went to what I call ‘Broadway bootcamp.’ Meryl started training in September of 2019. She trained like an athlete for four months to do all the dancing and to sing that belting kind of Broadway thing.”

But the film version also added what Murphy estimates is “25 to 30% new material” to the Broadway show. “We dramatized things that were said or hinted about in the Broadway musical, but not seen,” he said. “So for example, in the movie version, you actually get to meet Emma’s (actress Jo Ellen Pellman) grandmother, played by Mary Kay Place. You meet James Corden’s mother. We wrote a seven-page scene for Meryl and James in a hotel room. We wrote a new scene for Nicole Kidman and Jo Ellen. We added a lot of heartfelt material to really flesh it out, because I wanted to make a movie that had a lot of emotion in it and wasn’t just a musical romp, that it actually was about something.”

They also added one new song, “Wear Your Crown,” that is performed by the female cast at the film’s finale. As part of that song, Streep raps a verse – which, Murphy said, didn’t take any persuading at all.

“She heard it and said, ‘OK, great, let’s do it,'” he said. “You know, Meryl is up for any challenge. And I don’t think I ever talked to her about whether she thought it was challenging or not. She just did it. And I think it’s her first take. She gets to rhyme something with ‘Michelle Obama’ — I know she loved that.”

For the record, here’s the couplet in question: “And if somebody starts in with new drama/Just go high like Michelle Obama.”

A more extensive interview with Ryan Murphy will run in the December issue of TheWrap magazine.