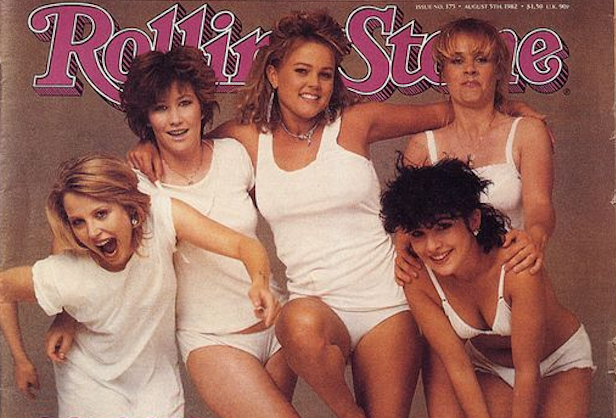 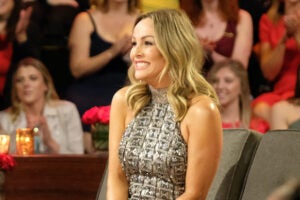 Why ABC Is Heartbroken During July Sweeps Without ‘The Bachelorette’

With a documentary on the pioneering all-female band premiering on Showtime, here’s a look back at a career pinnacle that turned sour

Alison Ellwood’s “The Go-Go’s,” a documentary about that pioneering all-female band that premieres on July 31 on Showtime, is one of my favorite nonfiction films of 2020. But as I said when I interviewed Ellwood and the band at the Sundance Film Festival in January, I can’t even pretend to be an objective reporter when it comes to this movie, because I’ve known the Go-Go’s since before their first album came out in 1981, and I wrote about them often and with affection over the years.

As someone who was around the band during their first years of existence and sporadically since then, I found that Ellwood told the story with sympathy but also honesty. The Go-Go’s were always tougher than their frothy, happy image suggested, and there was always infighting and excesses of various kinds — and the film shows all the dimensions of the story, and also has the footage to make a case for them as a damn good band, too.

My name pops up in the film a couple of times when my stories about the band are pictured on screen, but the moment it really stirs up memories for me is when it goes into some detail on a magazine feature that left a bad taste in the band’s mouths — a piece in Rolling Stone magazine that I wrote, and that came out almost exactly 38 years ago, on August 5, 1982.

That story was the first of the two times that Rolling Stone put the Go-Go’s on its cover — and it should have been a triumph for the band that had come from punk clubs in Los Angeles to have a mainstream hit album with “Beauty and the Beat” and its two hit singles, “Our Lips Are Sealed” and “We Got the Beat.” The magazine brought in its star photographer, Annie Liebowitz, to shoot the cover, which should have been another magical moment — except that Liebowitz persuaded the reluctant band to don white Hanes underwear for the cover shoot, and then a Rolling Stone editor slapped the leering and offensive headline “Go-Go’s Put Out” on the shot. 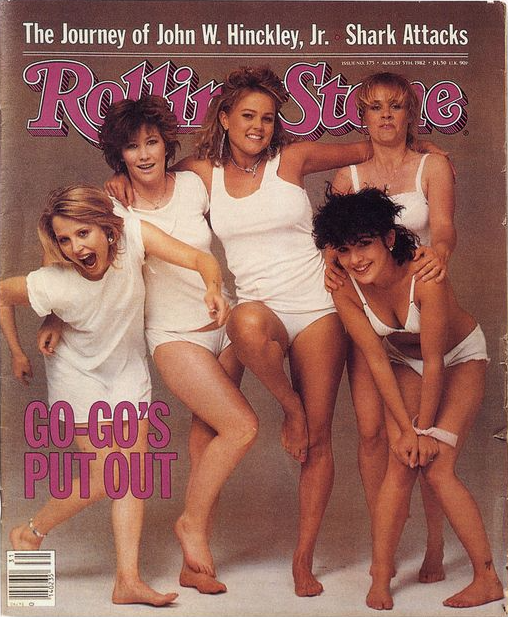 “It was a dream come true to be on the cover of Rolling Stone, but why had they gone out of their way to make a joke out of our cover?” Go-Go’s bassist Kathy Valentine wrote in her terrific recent memoir, “All I Ever Wanted.” “This pinnacle had a bitter aftertaste.”

And when I read that from Kathy, or watched the other band members in the film talk about how disappointed they were in the cover, I had to agree. As the writer of the the cover story that ran under that headline, it left a bitter aftertaste for me, too.

So how and why did it happen? I remember that era at Rolling Stone well, because it was a time in which there was a real tug of war going on in the halls of the magazine’s 5th Avenue headquarters in New York City. A number of the publication’s top editors looked at surveys that showed readers moving away from the magazine when they hit their mid-20s and decided that the future lay in covering less rock ‘n’ roll and more film and television.

Those of us in the music department disagreed, of course, and felt that rock music was being treated with a distinct lack of respect by the higher-ups.

As the only staff writer in the Los Angeles office, I pushed for the magazine to let me do a feature on the Go-Go’s after they put out their first album in the summer of 1981. And when the album began to rise up the charts and the band hit the road opening for the Police, I went on the road with them to Cleveland and Detroit, where a blizzard hit and we spent a Sunday marooned inside the Book Cadillac Hotel downtown, watching a punk-rock-themed episode of “CHiPS” on TV.

But even as the album hit No. 1, my entreaties that it should be a cover story went nowhere. The magazine kept delaying my story and putting a string of actors on the cover: Timothy Hutton, Mariel Hemingway, Steve Martin, Sissy Spacek, Sylvester Stallone …

My story sat in limbo for months, until managing editor Terry McDonnell reluctantly agreed to give the Go-Go’s the cover to coincide with the release of their second album, “Vacation.” I went into the studio and did some follow-up interviews, and it seemed to be very good news when Liebowitz was booked to shoot the cover — although it was odd when stories came back about the white underwear she’d asked them to wear. (I still remember drummer Gina Schock telling me, with a grimace, “I grabbed the biggest t-shirt I could find” from the pile of underwear Annie had offered.)

I asked the music editor in New York what was up with the underwear shoot, and he shared an odd story: Annie, he said, wanted to do some kind of riff on the recent photo Richard Avedon had taken of Nastassja Kinski reclining nude with a boa constrictor, and had even thought of incorporating rubber snakes into the Go-Go’s shoot. I have no idea if that is true — it was the last I heard of the story, and there were no snakes of any kind at the shoot.

Also Read: The Go-Go's' Kathy Valentine on Stardom, Sexism and How to Handle a Pandemic (Video)

And maybe, with plain cotton underwear, the photo would have come across as a knowing parody of sexy cover shoots if it weren’t for that “Go-Go’s Put Out” tagline. But that pushed it straight into a smarmy, sleazy territory that was also dismissive of the women on the cover, and it horrified me and most of the music department.

As I recall, one of the editors defended the cover line to me by saying something along the lines of, “Well, they did put out a new album,” but everybody knew that if that’s what the headline meant, it would have been the dullest headline in the history of dull headlines. The double entendre, obviously, was the only reason for its existence.

Looking back at Rolling Stone from that year, I discovered that 17 covers featured men, all of them fully clothed. Six of the covers featured women, and only two two were fully clothed. The others were apparently nude in bed (Kinski), wearing a bathing suit (Mariel Hemingway), shot only from their bare shoulders up (Bette Midler) or in their underwear (the Go-Go’s). Liebowitz shot 15 of those covers: 12 featuring men, none in any state of undress, and three featuring women, with only one, Sissy Spacek, fully clothed.

So yes, there was a certain frat-boy tone to the magazine in that era (I’m not sure, but we may have had one female writer at the time), but also what seemed to be a disrespect for rock music in general. I attributed much of that to David Rosenthal, an editor outside the music department who was celebrated for writing the magazine’s famous Jim Morrison cover line from 1981: “He’s Hot, He’s Sexy and He’s Dead.” He only edited one of my stories in the time he was there, but it was the Go-Go’s story. He didn’t do much to the story itself, apart from improving the lead, but I figure he probably wrote the headline, which fit with my feeling that he had no respect for rock. (He later edited Bob Dylan’s great book “Chronicles,” so go figure.)

The punchline, in a way, is that the movie “E.T.” came out that summer, and Rolling Stone put E.T. himself on the cover of an issue in late July. It was one of biggest selling covers we’d had in years, and the anti-rock editors were all delighted because they thought it meant they were right to want to focus on movies.

But then the Go-Go’s issue came out two weeks later.

The next time I was in the New York office, Terry McDonnell came up to me and said, “You were right.”

By the way, the next time the Go-Go’s were on the cover, two years later, they got to be fully clothed. The headline was marginally more respectful, but even then it carried a sexual connotation: “Women on Top.”

The more things change, as they say.

This is all a minor sidelight to “The Go-Go’s,” the movie, but it’s one that I couldn’t help but think about when I watched the film. Of the 16 Rolling Stone cover stories I wrote over the years, I’ll always have a special feeling for that one, because it was the one I had to fight the hardest to get. (Full disclosure: I just re-read it, and there’s barely a sentence in it that I wouldn’t like to change.) But just as it left a bitter aftertaste for the band, it did so for me, too.