On Friday the 13th, Universal Pictures and Blumhouse Productions have taken the opportunity to release a horror film of their own on the unofficial horror holiday: “Firestarter.” Based on the novel of the same name by Stephen King, this new update finds Zac Efron stepping into the role of the father of a young daughter who develops pyrokinesis.

But as the moviegoing world has shifted significantly since the pandemic, “Firestarter” isn’t exactly getting the most traditional of releases. Read on for everything you need to know about how, when and where to watch the “Firestarter” remake. 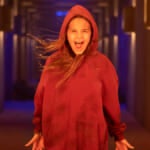 Is “Firestarter” in theaters or streaming?

Both! “Firestarter” was released Friday, May 13 in theaters but is also streaming exclusively on Peacock on the same day.

There are three different tiers for Peacock content – a free version, Peacock Premium with limited ads for $4.99/month and Peacock Plus with no ads and offline viewing for $9.99/month.

Who is in the “Firestarter” cast?

What is “Firestarter” about?

Based on the 1980 novel by Stephen King, the story follows a young girl who develops pyrokinetic powers that forces her and her father to go on the run as they’re pursued by a government agency known as “The Shop.” Also hot on their trail is a bounty hunter named John Rainbird who wants to use the girls’ powers for evil.

What other Zac Efron movies are streaming?