If you’re ready to feel thrills and chills of the mind, the prequel to the 2009 horror movie “Orphan,” premiering Aug. 19, might be for you.

Isabelle Fuhrman returns to the screen in “Orphan: First Kill” as Esther, who cleverly escapes from Estonian psychiatric facility and travels to the U.S. There, Esther manages to impersonate the missing daughter of a wealthy family — until her plans unravel.

When is “Orphan: First Kill” in theaters?

Yes, the prequel is available on Paramount+ and on demand beginning Aug. 19. 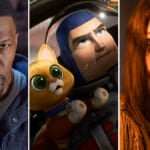 What is “Orphan: First Kill” about?

Explaining how she ends up getting adopted by the Colemans in “Orphan,” the horror flick follows Esther Albright, who prepares a deceptive and clever plan to escape a psychiatric facility in Estonia. Making her way to America, Esther impersonates the missing child of a wealthy family and soon enters the home of unsuspecting parents, Tricia and Allen Albright. However, Esther’s facade comes crashing down when an unexpected twist turns Esther against a mother who will do anything to protect her family.

Who is in the “Orphan: First Kill” cast?