Jon Stewart is making his triumphant return to the world of television six years after leaving “The Daily Show.” Stewart has popped up here and there over the last few years, notably on “The Late Show with Stephen Colbert,” on which he’s served as an executive producer, but his new series “The Problem with Jon Stewart” puts him back in the spotlight.

So how do you watch Jon Stewart’s new show? When do new episodes drop? And what, exactly, is “The Problem with Jon Stewart” about? Here’s everything you need to know. 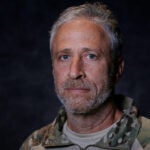 Where Is “The Problem with Jon Stewart” Streaming?

“The Problem with Jon Stewart” premieres on Thursday, Sept. 30 on Apple TV+. It is an Apple TV+ original, and thus will be exclusively streaming on that platform. You won’t be able to watch it anywhere else. Subscriptions for Apple TV+ cost $4.99 a month.

When Are New Episodes of “The Problem with Jon Stewart” Released?

Each episode will also be accompanied by a companion podcast episode that digs even deeper into the topic at hand.

What Is “The Problem with Jon Stewart” About?

Each episode of “The Problem with Jon Stewart” will tackle a major “problem” facing society today, and will feature Stewart hosting a panel of experts to discuss potential solutions to said problem. Leading with “compassion and humor,” the show will explore complex topics through the “differing perspectives of stakeholders, experts and individuals confronting these challenges.”

The first episode, titled “War,” finds Stewart talking about American veterans — specifically those affected by so-called “burn pits” that are common practice in the military and have led to countless illnesses and deaths in the veteran community. The problem is that right now, the VA refuses to cover the cancer-causing effects of these burn pits.

The episode begins with Stewart explaining the problem in detail, then hosting a panel of veterans and experts on the matter. It concludes with him sitting down for a confrontational interview with the Secretary of Veterans Affairs to discuss what can be done to fix this issue. 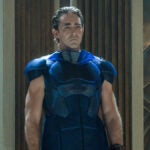