Horror film “They/Them” (pronounced “They Slash Them”), from producers Jason Blum and Michael Aguilar, finally slashes its way onto screens in the first week of August.

TheWrap has rounded up all the details regarding how to watch “They/Them” below. 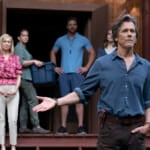 Will “They/Them” Be Streaming?

After premiering on the closing night of Outfest 2022, “They/Them” will land on Peacock for general audiences Aug. 5.

What Is “They/Them” About?

The Peacock original film takes place at a gay conversion camp with programming aimed at ‘helping campers find a new sense of freedom.’ The trailer shows campers arriving at Whistler camp in a bus, driving under a sign with the motto “Respect Renew Rejoice.” The weeklong stay starts with a relinquishing of cell phones and a division into boys’ and girls’ cabins. The creepy counselors use questionable methods of conversion therapy, which only get scarier. Soon a masked killer starts appearing to slash certain campers. 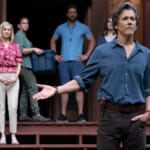