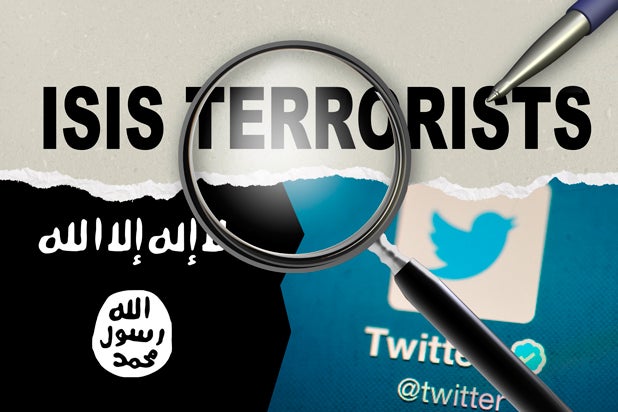 After Twitter suspended 2,000 accounts linked to the self-proclaimed Islamic State (ISIS) in recent days, the company’s co-founder, Jack Dorsey, became the target of threats from supporters of the terror group.

The incident ignited a heated debate over whether or not social media networks are doing everything in their power to limit the use of their technology by terrorists.

“This is a major threat,” executive director of The Investigative Project on Terrorism Steve Emerson, told TheWrap. “ISIS expertise on social media is phenomenal. Their technical ability is 10 shoulders above Western governments and even the inventors of social media.”

Also Read: ISIS Supporters Threaten Twitter Founder Jack Dorsey: Virtual War on Us Will Cause Real War on You

An upcoming study being published by the Brookings Institute, an independent think tank based in Washington D.C., suggests as many as 46,000 Twitter accounts were used by Islamic State supporters during a three-month period last fall. Of them, 30,000 are still active.

Though Twitter’s official policy bans “direct, specific threats of violence against others,” the company has come under fire for not monitoring terrorist activity on its network.

“What we’ve seen from Twitter up until now is that they put pressure on [ISIS] for a while and then they scale back for a while,” terrorism expert and author of the study, J.M. Berger told TheWrap. “Twitter needs to be more transparent.”

Berger said he would give the company a C+ for the way it’s handled ISIS so far.

Twitter declined TheWrap’s request for an interview, but a spokesperson for the company said in a statement, “Our security team is investigating the veracity of these threats with relevant law enforcement officials.”

It’s clear this latest development has put Twitter in an untenable position. If it gives the government too much access to user information, it could anger privacy and free speech advocates. If it doesn’t cooperate, it could enrage those demanding action against terrorists.

While Twitter has the capability to completely ban ISIS from its network, so far the company has opted not to.

“For a long time, Twitter didn’t want to get into the role of policing its content,” said Berger. “ But it also has an obligation to provide a safe space for its users.”

Twitter CEO Dick Costolo recently admitted he was embarrassed by the company’s failure to crack down on abuse.

In an internal memo obtained by The Verge, Costolo wrote, “We suck at dealing with abuse and trolls on the platform and we’ve sucked at it for years … It’s no secret and the rest of the world talks about it every day. We lose core user after core user by not addressing simple trolling issues that they face every day.”

It’s been less than a year since ISIS burst onto the world stage, taking over large swaths of territory and shocking the world with violent tactics that include beheadings and the burning of victims alive. During that time, ISIS has morphed into a highly organized group, with a surprisingly sophisticated social media campaign that could give some of America’s best branding experts a run for their money.

But, according to Berger, all is not grim. At least 13 of the 16 major ISIS distribution accounts were among those shut down.

The problem is not limited to Twitter, or even ISIS for that matter.

Last summer, Israelis awoke to a frightening reality after the terror group Hamas announced it captured an Israeli soldier by the name of Oron Shaul during “Operation Protective Edge.”

Adding insult to injury, the terrorist organization hacked into Shaul’s Facebook page, posting morbid messages aimed at scaring Israelis. “We’ve taken a second Shalit,” one of the posts said, referring to former POW Gilad Shalit, who spent more than five years in a Hamas prison. This time, they claimed to have captured “a young, blond-haired boy. Congratulations on this Ramadan victory. This is the most beautiful holiday gift.”

“Israelis tried to get the FBI to get a court order to compel Facebook to give data on where the hackers might be, so they could pinpoint the physical location in the tunnels to see if the soldier was alive,” said Emerson, whose Investigative Project on Terrorism is one of the world’s largest storehouses of archival data and intelligence on terrorist groups. “Unfortunately the U.S. government denied the request.”

But Emerson says shutting down ISIS social accounts can, at times, do more harm than good.

“A lot of the arrests of ISIS volunteers have happened thanks to tips generated from their own Facebook pages,” he said. “Shutting down the page could mean losing those valuable leads.”

“There is some useful intelligence that comes out of these networks,” he said. “It’s just that we shouldn’t let them run rampant. If Twitter consistently suspends accounts at this pace then they’ll definitely be able to keep the ISIS accounts to a much smaller size.”