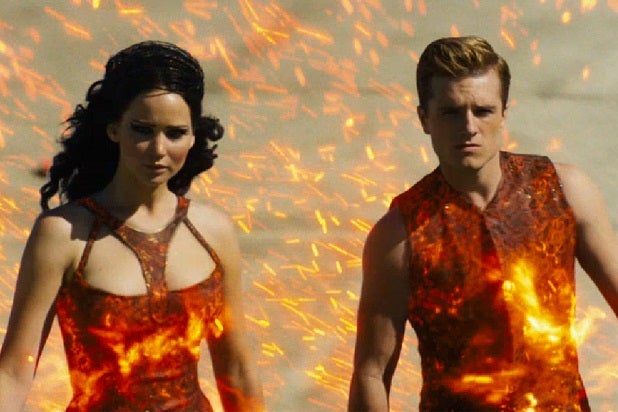 “The Hunger Games: Catching Fire” is tracking for an opening weekend that could go as high as $185 million when it debuts on Nov. 22, based on box-office marketing data released Thursday.

The higher pre-release tracking goes, the less reliable it becomes, and we’re still three weeks away from the opening. But the Jennifer Lawrence sci-fi sequel looks like it will be a box-office monster for distributor Lionsgate Entertainment.

The distributor views the numbers more conservatively, and is at this point projecting an opening between $140 million and $150 million, citing the crowded marketplace which will include two major Disney releases: “Thor: The Dark World” (Nov. 8) and the animated “Frozen” (Nov. 27).

If it does hit that high-end mark however, “Catching Fire” would be the year’s biggest opening, ahead of the $174 million May debut of “Iron Man 3.” And it would be within striking distance of the all-time record for a weekend debut of $207 million, established by “The Avengers” in May of 2012. The record for a November opening, the $142 million rung up by “The Twilight Saga: New Moon” in 2009, is well within reach.

Disney’s two Marvel blockbusters had two major advantages that Jennifer Lawrence‘s Katniss and company won’t, however: they opened in the summer when schools are out — and they were 3D.

“Between Jennifer Lawrence‘s exploding popularity and the momentum from the first movie, ‘Catching Fire’ is going to be a cultural phenomenon, and will be significantly bigger than the original at the box office,” said Exhibitor Relations vice-president and senior analyst Jeff Bock.

“Without the 3D, though, I can’t see it breaking the opening weekend record,” he said.

Tickets that included the $3-$4 surcharge for 3D accounted for about 52 percent of the record “Avengers” debut, and 49 percent of the ‘Iron Man 3” total.

“Catching Fire” director Francis Lawrence and the filmmakers opted to maintain continuity and keep the sequel 2D, though certain scenes were shot on Imax film.

That’s the approach Christopher Nolan used on “The Dark Knight Rises,” a critical success and box-office behemoth that broke Imax records on the way to a $1.08 billion global haul.

Both “The Avengers” and “Iron Man 3” got major boosts from Imax, and “Catching Fire” should too, overseas as well as domestically.

“Catching Fire” has been among the daily leaders in advance sales at online broker Fandango since it went on sale a month ago, and was running No. 2 Thursday behind another Lionsgate movie, “Ender’s Game,” which opens Friday.

Liam Hemsworth and Josh Hutcherson co-star in “Catching Fire,” along with Sam Clafin, Woody Harrelson, Elizabeth Banks, Phillips Seymour-Hoffman, Jenna Malone, Stanley Tucci and Donald Sutherland. It is based on the Susan Collins novel and produced by Nina Jacobson, via her Color Force studio. Michael Arndt and Simon Beaufoy wrote the screenplay.