Seven years after America’s foray into an ill-fated war in Iraq, Hollywood heaped glory on a tiny, taut film that took audiences to the front lines of the grinding conflict.

"The Hurt Locker," a pitiless look at the soldiers diffusing bombs in Iraq, won six Oscars including Best Picture and Best Director at the 82nd Academy Awards on Sunday.

The triumphs made history for the Academy Awards: Kathryn Bigelow became the first woman to win the directing honor; and the film, taking a meager $21 million worldwide at the box office, became the lowest-grossing Best Picture winner (the previous low was "Annie Hall," which wound up grossing about $38 million). 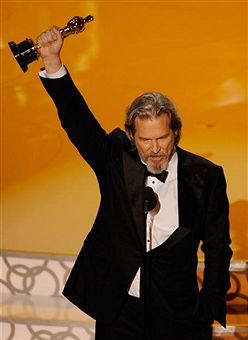 (For a complete list of winners, click here.)
Though both wins were historic, neither was much of a surprise. "Hurt Locker" outpaced the global juggernaut "Avatar" — which won three Oscars in visual categories — for the entire awards season, taking home all important predictors except for one: the Golden Globe.
But this time, Bigelow’s director award was no consolation prize.
"There is no other way to describe it — this is the moment of a lifetime," she said as she accepted the directing award.
She certainly didn’t have much time to take it in, for just as quickly as she left the stage, Tom Hanks took it and abruptly announced that "The Hurt Locker" had won Best Picture.
Without even reading the nominees, it was such a rushed reveal that even Bigelow looked unsure as she dashed back onstage, still clutching her directing trophy.
Bigelow was only the fourth woman to ever be nominated for best director. Lina Wertmüller (1975, "Seven Beauties"), Jane Campion (1993, "The Piano"), and Sofia Coppola (2003, "Lost in Translation") all were passed over.
"Avatar" took the second-most trophies with three, including production design, cinematography and visual effects. "Up in the Air," considered one of the early favorites for Oscar glory, was shut out.
"The Hurt Locker’s" six wins included best screenplay, two sound honors and the editing award.
Jeff Bridges won the best actor award for his role as an aging country star in "Crazy Heart," and Sandra Bullock won for her role as a football mom who takes in a troubled teen in "The Blind Side."
"Did I really earn this, or did I just wear y’all down?" said the ever self-deprecating Bullock — who became the only person to win both a Razzie and an Oscar in the same year — before launching into an emotional acceptance speech that ended with a tribute to her own mom.
Bridges also took the stage for a more giddy tribute to his showbiz parents (then casually referring to most of the people 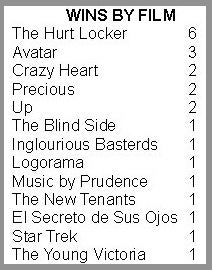 he thanked as "man").
"Thank you, Academy members!" he yelled, hoisting his statue skyward. "Mom and dad,  yeah, look! Whoo!"
Winning two Oscars apiece were "Precious," including Mo’Nique’s win for best supporting actress and adapted screenplay; and "Up," which won best score and best animated feature. "Avatar" won for best production design, cinematography, and visual effects.
In a telecast that was promised to be dance-heavy, first-time producers Adam Shankman and Bill Mechanic sure busted out the moves, presenting the best-score category with a protracted interpretive-dance segment that included dozens of bodies wriggling around the stage, most notably (or is it most out-of-place?) a man doing a pop-and-lock jam, and another doing "the Robot."
The show opened with a razzle-dazzle song-and-dance number starring not hosts Steve Martin and Alec Baldwin, but Neil Patrick Harris, the well-received Emmy host who sang "No One Wants to Do It Alone" amid a small army of glammed-up showgirl dancers and guys in tuxedos. It was fine as over-the-top dance numbers go, but it didn’t do much to deliver on the promises of a refreshed formula.
Mo’Nique gave the night’s most impassioned and memorable acceptance speech amid a parade of forgettable ones, thanking the filmmakers, co-producers Oprah Winfrey and Tyler Perry, and her husband, "for showing me you have to forego what’s popular in order to do what’s right. And baby, you were so right." 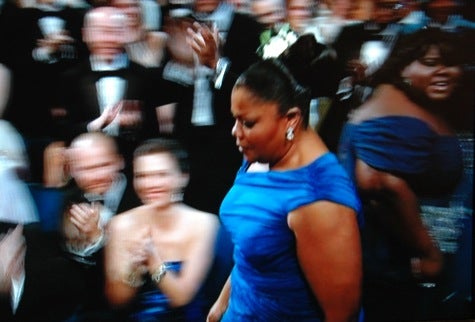 Backstage, Mo’Nique said she was wearing the royal blue dress because it’s the same color that Hattie McDaniel wore in 1940 for her supporting-actress Oscar for "Gone With the Wind."
"The reason I have this gardenia in my hair is because it’s the flower she wore the night she won. So Hattie McDaniel, I feel you all over me and it’s about time the world feels you all over them."
The original screenplay honor went to Mark Boal, the journalist who wrote "The Hurt Locker" after his time embedded with a unit stationed in Iraq.
"I was a reporter back from Iraq with the idea for a story about these men on the frontlines of an unpopular war," Boal said, adding: "I would also like to thank and dedicate this to the troops, the 115,000 who are still in Iraq, the 120,000 in Afghanistan and the more than 30,000 wounded and 4,000 who have not made it home."
Christoph Waltz and "Up" were the first two Oscar winners of the night. Waltz took a statue for his supporting-actor role as the multilingual Nazi Hans Landa in "Inglourious Basterds" — a foregone conclusion long ago, as the Austrian newcomer won nearly every available Oscar precursor in the category.
"And the winner is," Penelope Cruz said, invoking a presenter’s phrase not used since 1988, "Christoph Waltz." (For the last 22 years, the chosen words have always been, "And the Oscar goes to … ".)
It was the first nomination for Waltz, who spent most of his acceptance speech talking about his castmates, crew and director.
"I always wanted to discover some new continent … and then I ran into Quentin Tarantino. And he put this script in front of me and said, ‘This is where we are going.’"
"Up" director Pete Docter accepted the Best Animated Feature award for the oddball tale about a cranky balloon salesman, also a prohibitive favorite in a category full of strong contenders, none of which really stood a chance.
"Never did I believe making a flip-book out of my third-grade math book would lead to this," Docter said.
x
Looks like you're enjoying reading