If an episode of “Seinfeld” got struck by gamma radiation, hulked out and wandered into the world by its tragic, bizarre self, it might look a little like writer-director James Morosini’s “I Love My Dad.”

It’s a film about someone who, for perhaps sympathetic reasons, does an apocalyptically wrong thing and then can’t stop doing it. Because revealing you’re a liar is very hard, and living a horrible lie seems ever so slightly easier.

Patton Oswalt stars as Chuck, a divorced dad who, instead of being part of his son’s life, spends years making excuses for not showing up. We hear a lot of these excuses over the opening credits, but we don’t see the impact it has on his son, Franklin (Morosini), until just after the end of the titles, where we find Franklin in group therapy for people who have attempted to kill themselves. 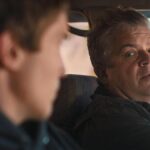 Franklin emerges, hopeful but socially awkward, and decides that the best thing to do is to cut his emotionally manipulative, unreliable father out of his life, blocking his telephone number and his social media accounts. When Chuck realizes that there are now, at last, tangible consequences for his actions, he is completely devastated. His only hope comes from his co-worker Jimmy (Lil Rel Howery), who points out that Chuck can simply make a new account under a fake name and follow Franklin anonymously.

Underhanded and disrespectful? Sure. But the real crisis comes when Chuck decides to borrow the identity and photographs of a waitress who works at a local diner, Becca (Teen Vogue YouTube host Claudia Sulewski, in her acting debut). Franklin messages “Becca” when he notices her account looks suspicious — Franklin is her only friend, even though he’s a complete stranger — but not only does “Becca” respond like a human being, she also shows serious interest in who he is, how he feels and what he’s doing. “Becca” is everything he has been looking for in a personal connection.

So naturally, Franklin assumes he has an online girlfriend. It just so happens that his girlfriend is his own dad.

“I Love My Dad” claims, at the start of the film, to be based on a true story that happened to Morosini himself, although just how much is true regarding these specific events is uncertain. Morosini’s screenplay takes extremely uncomfortable turns, like when Chuck realizes the only way to perpetuate the lie and to make Franklin feel appreciated by this fictional online friend is to participate in an online sex chat with him while they’re in adjoining rooms. 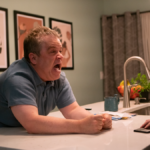 Also Read:
Patton Oswalt Knew ‘I Love My Dad’ Could Have Been ‘a Fiasco’

Oswalt contorts, emotionally and logically, to help us understand how Chuck’s decision to continue these, let’s call them “shenanigans,” makes sense. But it’s Morosini who crafts the labyrinthine meta-psychological narrative where, even as the actor plays himself while his father performs unthinkable acts of betrayal, the writer-director always finds ways to sympathize with his father.

Surely the movie wouldn’t work otherwise; “I Love My Dad” is close enough to a horror story as it is, but without at least some understanding about why Chuck impersonated his own son’s girlfriend, it might be unwatchably despicable. Even so, it’s hard to shake the feeling that Morosini has done more heavy lifting to forgive his father than the movie does, and that his sympathetic approach to the story won’t necessarily be shared by everybody in the audience, since we’re finding out about this extremely disquieting anecdote for the very first time.

Whether you laugh with “I Love My Dad” or never shake the queasy feeling in your stomach, Morosini’s film is remarkably sensitive and eerily confessional. It harkens back to similar tales of well-intentioned lies spiraling out of control, especially in discomfort comedies, but by stretching the tightly structured madcap deceptions out to a feature-length, Morosini mutates the genre into an eerie tragedy. 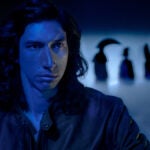 Every member of the cast is on board with Morosini’s morbidly amusing tone. Oswalt carries the film, and Morosini has to play naive until it’s time to break down completely. Sulewski seems to be having the most fun; she plays out the chats with Franklin and portrays, depending on the scene, either Franklin’s dream girl or Chuck’s co-conspirator. It’s a complicated balancing act, and she never wobbles. Rachel Dratch also stands out, in an intentionally dreary way, as Chuck’s long-suffering boss and girlfriend, who absolutely deserves better than what Chuck has to offer her but seems trapped in a blasé purgatory either way.

“Blasé purgatory” accurately describes the film’s visual aesthetic, a dingy and overcast universe from cinematographer Stephen Capitano Calitri (“Paper Year”) where oh so many low-budget independent comedies seem to take place. The film’s style effectively captures the lost and pained qualities of its characters, but maybe too well, since the doldrums can’t help but rub off after a while. It’s hard to pin down whether “I Love My Dad” is a good movie or merely an interesting one.

Maybe the distinction is irrelevant. Morosini’s efforts to present his audience with an unthinkable situation and then to force them to sympathize with the person responsible for all the suffering his characters endure is confrontational, and whether it challenges the audience or just makes them feel weird is ultimately up to every individual watching. If nothing else, they’ll be forced to think and feel something unexpected, whether or not they have a good time doing so. That’s not nothing, even if it’s not great.