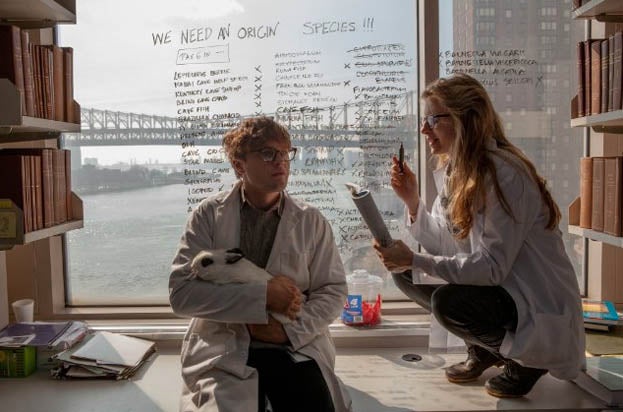 I’ll say this about “I Origins”: Michael Pitt and Brit Marling wear great-looking glasses in it.

Those specs don’t really fit the characters, but at least puzzling over writer-director Mike Cahill‘s costuming choices distracted me from the ridiculous love story underpinning the first half of the movie.

Pitt, an unconvincing scientist if there ever was one, plays molecular biologist Ian Gray, a university researcher obsessed with eyes to the point he has assembled a database of them. One Halloween night, he takes himself and his eye-catching spectacles to a party, where he meets a goth woman with a stocking covering all of her face except her eyes.

Naturally this is catnip to our dear researcher, and the two proceed to get it on. Then poof, just like that, she’s gone, forcing our lab-coat wearing scientist to search for her distinctive orbs wherever and however he can.

When he finds Sofi (Spanish actress Astrid Berges-Frisbey) after a series of seeming coincidences, the two proceed to begin a relationship of opposites: She is intuitive and ethereal, while he demands proof. We see them frolicking around New York in series of storybook scenes: Cahill (“Another Earth”) clearly intends them to be endearing, but these moments come off as tedious and painfully familiar.

Groan-inducing dialogue such as “I had a feeling I knew you, and you knew me,” and blather about being connected in past lives don’t help matters.

Luckily, we have Karen, a research assistant played by frequent Cahill collaborator Brit Marling, to ground the story. Inquisitive and rational, Marling’s Karen sports those lab coats with greater conviction.

Sofi and Ian engage in all sorts of philosophical talk about doors and windows when they’re together. William Blake and Jim Morrison would be so proud, but those with less patience for metaphors may find themselves suppressing an eye roll or two of their own.

“I Origins” takes a turn for the better once Sofi’s out of the picture. The action flashes forward to the present day, with Ian a successful scientist and Karen is about to give birth to their child. Their happy world is upended when a routine retina scan of their child turns up unsettling results. Tables turned, the scientists must put their deductive reasoning to work and suss out what other researchers are really investigating.

It is here where the film, winner of the Alfred P. Sloan prize for science-themed movies at this year’s Sundance, starts to get interesting and truly otherworldly. “I Origins” simultaneously evokes the creepier side of retina scanning in an age of reduced privacy — do we really want to live in a society where a database of such distinctive data can be so readily accessed? — while also exploring the spiritual notion that we could be linked to strangers in explicable ways. Maybe we aren’t as unique as scientists like Ian would like to think we are.

Old pal Kenny (Steven Yeun, “The Walking Dead”) gives the couple access to the latest biometric technology, which draws Ian to India. There he runs into Archie Panjabi (“The Good Wife”) playing Priya, a woman running a community center, before eventually finding a precious link to his beloved Sofi.

I suppose this is meant to be incredibly romantic — or maybe it passes for closure — but it just seems a little creepy. Karen has been awfully understanding of Ian’s lingering love for Sofi, and seems like she could actually be the stronger scientist of the two. Does she really deserve a husband so clearly obsessed with an old flame? Maybe Cahill can explore that philosophical question in his next movie.

The final third of “I Origins” helps make up for much of the movie’s earlier shortcomings, and while it does have a nice gothic look, it’s not nearly as captivating as Cahill intends. All the hair tussling in the world can’t make Pitt seem like a credible scientist, nor can it turn hackneyed musings into captivating insight.