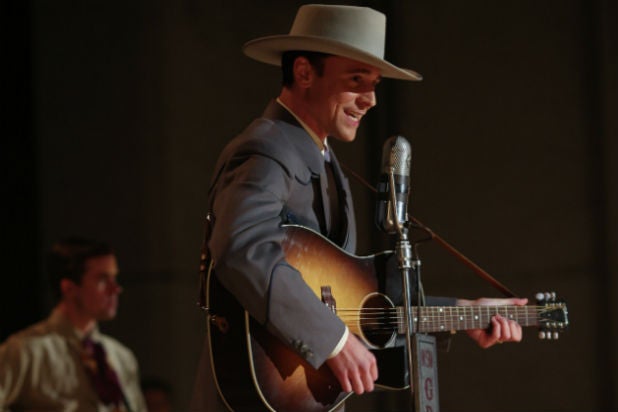 Country music biopics have fared pretty well at the box office and in the awards race over the years, and on Friday night at the Toronto International Film Festival, the Hank Williams film “I Saw the Light” attempted to join a hit parade that has included films about Johnny Cash (“Walk the Line”), Loretta Lynn (“Coal Miner’s Daughter”) and Patsy Cline (“Sweet Dreams”).

Like most of its predecessors, the film paid more attention to its subject’s tortured life than his creative genius. And like the others, it rose above the standard biopic movies mostly thanks to a towering lead performance by Tom Hiddleston as the haunted country icon.

“Walk the Line,” “Coal Miner’s Daughter” and “Sweet Dreams” all landed Oscar nominations for their leads, and British actor Hiddleston makes a strong case to join their ranks with an indelible performance as the star whose excesses turned him into a shell of his former self before his heart gave out.

The role, clearly, is a rich one. Before Jimi Hendrix and Janis Joplin died young and tragically, before Jim Morrison and Kurt Cobain fought addictions, before Little Richard and Jerry Lee Lewis mixed the profane and the spiritual, there was Hank Williams.

He was a protean force in country music in the 1940s and ’50s and long after in the legacy he left behind. He sang of good times and then wrote piercing spirituals. He battled the bottle and pills. He died at the age of 29 in the back seat of a car on the way to a gig.

Dubbed “the hillbilly Shakespeare” at one point, he evinced a showman’s timing until the end: The last single released in his lifetime was called “I’ll Never Get Out of This World Alive.”

Also Read: Why Emmy-Nominated Scientology, Kurt Cobain Docs Could Be Overlooked by Oscars

His life was already turned into a regrettable movie in 1964, “Your Cheatin’ Heart,” with the perpetually tanned George Hamilton as an unconvincing Williams. There was also a little-seen Canadian production in the 1980, “Hank Williams: The Show He Never Gave,” that envisioned a final concert and is a neglected gem.

But “I Saw the Light” is bigger, grander and far more ambitious. Director Mark Abraham covers the last decade of Williams’ life, which encompasses two marriages, more than a dozen hit records, rampant self-destructive behavior and classic songs like “Cold, Cold Heart,” “Move It on Over” and “Your Cheatin’ Heart.”

The timeline feels accelerated simply because there’s too much ground to cover in two hours — as Abraham said when he introduced the film’s world premiere at the Ryerson, “I knew I couldn’t get it all exactly right, but I did my best to make it true.”

For the most part it does feel true, though a music fan could certainly wish for more songwriting and less marital discord.

And then there’s the elephant in the room: the decision to let Hiddleston sing the songs himself.

The actor turns out to be a fine, convincing country singer, but that’s not enough. Williams’ voice was high, keening, utterly distinctive and such an integral part of his persona that if you don’t get it right, you’re missing something huge.

“Walk the Line” faced the same problem when Joaquin Phoenix sang Johnny Cash’s songs, counting on the power of his performance to overcome the fact that he didn’t really sound like Cash. It worked, sort of — and when you’re trying to put singers as singular as Cash and Williams onscreen, sort of is about the best you can hope for if you go the singing-actor route.

But I adore Cash’s music and I adore Williams’ music, and I don’t want sort of. There’s a reason that Marion Cotillard‘s Oscar-winning performance in “La Vie en Rose” found her lip-syncing to Edith Piaf’s recordings — because sometimes, close isn’t good enough.

The music in “I Saw the Light,” which should be the heart of the film, is like a very good cover version of a classic song. It’s enjoyable and it’s sometimes enough, but it’s not the real thing.