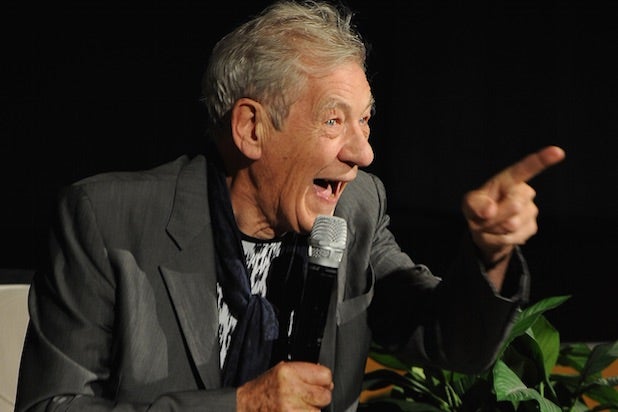 If Sherlock Holmes were a real person rather than a fictional one, he could sit in the lobby of the Los Angeles hotel where Ian McKellen has been staying recently and deduce exactly where the 76-year-old British actor has been every time he leaves his room: He’s been talking to voters and showing “Mr. Holmes,” the Bill Condon film in which McKellen delivers a delicious performance as an aging version of the celebrated detective.

But it wouldn’t take Holmesian powers of deduction to figure that out. This is a time of year when lots of awards contenders have been criss-crossing town, party-hopping and putting themselves and their films in front of people who’ll be casting ballots in the next couple of months. But few contenders have been as happily tireless as the veteran stage actor best known for playing Gandalf in the “Lord of the Rings” films and Magneto in the “X-Men” movies.

He’s a longshot to land a Best Actor nomination for his subtle and moving work in “Mr. Holmes,” to be sure. But so much goodwill has been following the celebrated actor, gay icon and accomplished raconteur as he makes the rounds that you can never rule him out.

Case in point: Thursday night in Beverly Hills, when Sir Ian entertained a full house at the Fine Arts Theater by telling priceless tales about the great women he’s worked with over the years. He had an Ava Gardner story with a great punchline: “You don’t need an agent if you’ve been married to Frank Sinatra.” He did a killer Maggie Smith impersonation. He delivered a touching tribute to the late Lynn Redgrave. And at the end of the night, most of the audience lined up in the lobby to get a word or two with McKellen.

And that was just a couple of hours in a week that went something like this:

On Saturday, he attended the Academy’s Governors Awards, representing “Mr. Holmes” and putting himself in front of a room that was divided between Academy voters and other awards hopefuls.

On Sunday, Laura Linney and Kathy Bates hosted a brunch for him at the British consul general’s residence in Hancock Park. Guests included Patrick Stewart, Jane Seymour, a number of Oscar voters and a sprinkling of press.

On Monday, he did a “Behind Closed Doors” Q&A with BAFTA Los Angeles members.

On Tuesday, he sported a jaunty hat and a bright pink tie at a Hollywood Foreign Press Association party. Then he did a Q&A covering his entire career at the Aero Theatre in Santa Monica, with Guillermo del Toro asking the questions and the audience invited to stick around for a screening of “Mr. Holmes.”

On Wednesday, Patrick Stewart and Elijah Wood hosted a dinner for him at the Chateau Marmont.

And on Thursday, he spent almost two hours on the stage of the Fine Arts Theater, talking about the great actresses he’s worked with and showing clips from a remarkable career.

And in between were more screenings and more Q&As — in other words, more of the kind of stuff that would be considered campaigning if McKellen didn’t seem to treat it so casually, and if he wasn’t such an utterly delightful storyteller.

(Believe me, even a brief conversation with the guy will have you discovering a new benchmark to apply before you can ever again use the phrase “he’s got a twinkle in his eye.” Few people twinkle like Ian McKellen twinkles.)

“I’ve got one of these things almost every day,” he told TheWrap good-naturedly at Sunday’s brunch, and then shrugged. “We don’t do any of this kind of thing at the BAFTAs [in Great Britain], and they seem to get pretty much the same results. But if they want me here, I’m fine with it.”

And if his presence serves as a reminder that the only actor ever nominated for the “Lord of the Rings” films was also one of the only “LOTR” nominees not to win, or that he was also on the losing end of an historic Oscar injustice when his indelible performance in “Gods and Monsters” lost to Roberto Benigni‘s mugging in “Life is Beautiful” … well, so much the better.

Clips from “Gods and Monsters” and one of the “Hobbit” films were shown on Thursday at the Fine Arts, as part of a funny, generous evening that its host promised would be neither fine nor particularly arty.

He also joked about going to the Governors Awards and hearing AMPAS president Cheryl Boone Isaacs’ call for more diversity: “Sitting there as an openly gay man, I thought, ‘Well, I’m doing my bit.'”

He admitted that he and Audrey Tatou commiserated on the set of “The DaVinci Code” because “neither of us understood a word of the plot,” and that he’s still waiting on Meryl Streep, who he said promised to work with him in the theater as soon as her film roles started drying up. “That was in 1985.”

And he talked about how he hired Annette Bening for “Richard III” because he wanted her and Robert Downey Jr. to play Americans in a cast of Brits — but Bening insisted on doing a British accent because otherwise people would think she wasn’t capable of doing one.

Through it all, he came across not like a dutiful campaigner, but an engaged and energetic storyteller who’s most at home in front of a live audience.

“As a theater actor, or any sort of actor, I’m always doing it for the audience,” McKellen told TheWrap in a recent interview. “They’re the raison d’etre. You’re saying, ‘I’ve come across this story I like, and we’re doing it for you.’ And of course if nobody turns up, there’s no performance.

“In the cinema, it doesn’t matter who turns up — the film will still play through. You don’t, when you’re making films, ever really reach the audience. And I do miss that.”