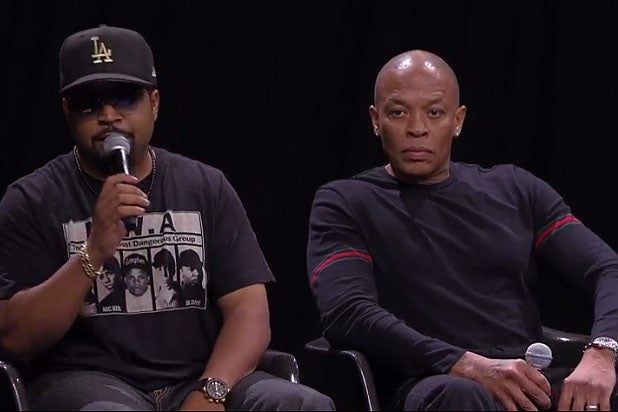 Nearly 30 years after gangsta rap group N.W.A exploded onto the music scene, Ice Cube says not much has changed when it comes to the way police officers deal with young black men.

“The fact that we live in a world where we have to remind people that black lives matter is terrible in itself,” he said Tuesday during a livestream Q&A at the YouTube Space L.A. promoting N.W.A biopic “Straight Outta Compton.”

After a rash of deadly incidents across the country involving police officers and African-Americans, Ice Cube, who is a father of four, admitted he’s concerned about his children’s safety.

“I tell my kids to make it home. That’s the most important thing,” he said.

N.W.A sold millions of records and helped put West Coast rap on the map. But the group also drew criticism for its singles such as the 1988 release “Fu*k tha Police” — an anthem against police brutality and racial profiling.

DJ Yella said Tuesday the song is just as relevant today as it was in the ’80s.

“It [police brutality] was deep in the ghetto back then. ‘Get on the ground. Face down,'” DJ Yella explained. “But nowadays, 26 years later, it’s like the same thing going on.”

Still, he admitted not all officers are bad. “It’s just the ones that cross the line,” he said.

During the conversation, Dr. Dre revealed that N.W.A’s groundbreaking debut album “Straight Outta Compton” took just “six weeks to record.” He also said his mother got emotional as she relived what her son went through while watching the movie at Monday’s world premiere. “She shed a few tears,” he said.

New Orleans-bred Mitchell touched on his preparation to play the late rapper, including getting the Southern California accent right and eating 4,000 calories a day to bulk up.

“This is my Eazy-E,” he said, pointing to Ice Cube and Dr. Dre. “These guys loved that dude, and I really feel like they wanted him to have the right mark.”

While N.W.A was born on the streets of Compton, F. Gary Gray revealed he was urged to make the movie in New Orleans, Miami or Boston, where tax incentives would make it cheaper to shoot.

But Gray, a longtime N.W.A collaborator, said no way. “I thought that it was really important to shoot in Los Angeles because L.A., Compton and South Central are like the sixth member of N.W.A.”

Gray also said he wants those who see the film to learn from the challenges that N.W.A faced.

“We touch on a lot of themes that are universal themes. There’s tragedy, there’s triumph, there’s brotherhood, there’s rags-to-riches,” he said. “I want people to have a great time, but I want you to be inspired.”

Watch the video from the Q&A below. The hour-long conversation starts at the 21:00 mark.