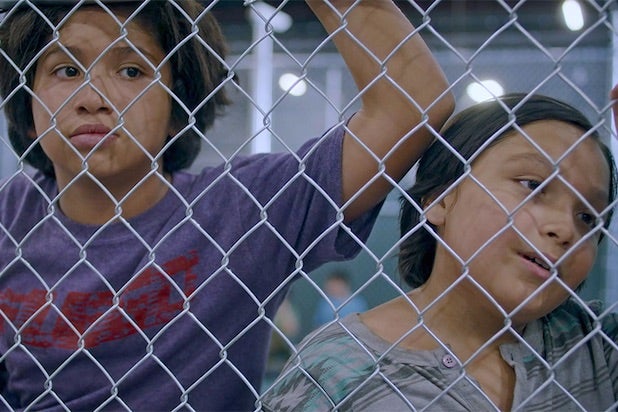 The end credits provide both the most potent moment and the most superfluous one in Daniel Sawka’s “Icebox,” a drama about immigration which premiered on Sunday at the Toronto International Film Festival.

Those credits tick off all the things that happened during the film’s postproduction period: the hard line taken by the Donald Trump administration on refugees fleeing Central and South America, the denial of refugee status to victims of gang violence in their home countries, the no-tolerance policy that has separated families, the children taken from their parents at the border …

Coming at the end of a film that details the plight of a 12-year-old boy forced to flee Honduras because of gang threats, the onscreen fact points turn the wrenching story of one boy into a sad statement on our country’s treatment of those in need, and reinforce just how timely “Icebox” is.

Also Read: Stephen Miller Called Out as 'Immigration Hypocrite' by His Own Uncle

But at the same time, those credits tell us things we already know, albeit with a few more details thrown in. It is impossible to watch “Icebox” and not be thinking about children in cages along our Southern border; current events would hang heavy in the minds of everyone who watches it even without the reminder that comes at the end of the film.

Anthony Gonzalez plays Oscar, a Honduran boy we meet writhing on a hard floor as gang members forcibly tattoo his chest with their logo. If he stays in Honduras, he’ll be putting himself and his entire family at risk unless he joins the gang — so he flees in the middle of the night for the United States, placing his fate in the hands of smugglers who clearly care not a whit for the safety of those they escort.

Separated from his group after crossing the border, Oscar is spotted by a drone and apprehended by border agents, who take him to a giant Arizona detention center for children. He’s eligible to be released into the custody of a relative, but his uncle in Arizona was also undocumented when he crossed the border, and he’s too terrified to come collect Oscar.

Stuck in a system he doesn’t understand without the means to escape, Oscar spends his nights huddled beneath a thin blanket with dozens of other children behind a chain-link fence; this might not literally be a cage, but that’s how it feels. He spends his days trying to figure out how to persuade his uncle, who won’t even answer the phone, to get him out, barely comprehending that he’ll also need to appear in court and make a case to stay in the country.

For viewers in today’s political climate, Oscar becomes a stand-in for every child currently in ICE limbo. We’ve seen these stories in YouTube clips or nightly-news segments; now we live with one for 90 minutes that bring home the futility of the situation, and the lack of humanity that produced it.

The film began as a short student film that the Swedish-born Sawka made at the American Film Institute. But he adapted it for a feature with the help of some heavy hitters, including producer James L. Brooks and his Gracie Films production company, as well as composers Steve Mazzaro and Hans Zimmer.

“Icebox” is not a nuanced exploration of the issues, and in some ways it may pull its punches: It is, after all, “TIFF Kids approved,” according to the festival website. Sawka is looking less for outrage than for compassion — though viewers may well find themselves feeling both of those things, along with a hefty amount of frustration that it has come to this.

The film is a political statement, to be sure, but more than that it’s a personal story haunted by today’s headlines.