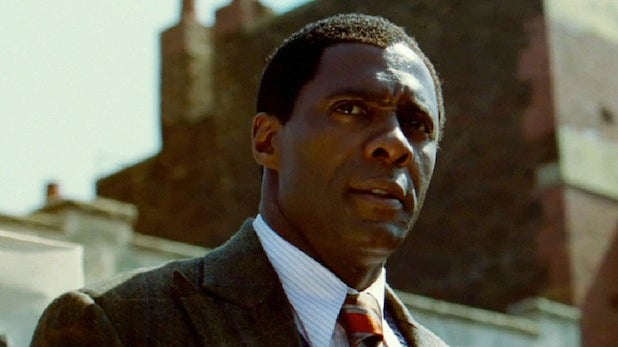 “What an honor it was to step into the shoes of Nelson Mandela and portray a man who defied odds, broke down barriers, and championed human rights before the eyes of the world. My thoughts and prayers are with his family,” said Elba, who later issued a second statement. “I am stunned at this very moment, in mourning with the rest of the world and Madiba’s family. We have lost one of the greatest human beings to have walked this earth, I only feel honored to be associated with him. He is in a better place now.”

“Today the world lost one of the true giants of the past century.  Nelson Mandela was a man of  incomparable honor, unconquerable strength, and unyielding resolve—a saint to many, a hero to all who treasure liberty, freedom and the dignity of humankind.  As we remember his triumphs, let us, in his memory, not just reflect on how far we’ve come, but on how far we have to go.   Madiba may no longer be with us, but his journey continues on with me and with all of us,” added Freeman.

Weinstein was at the London premiere of “Mandela: Long Walk to Freedom” when the news of Mandela’s death broke.

“One of the privileges of making movies is having the opportunity to immortalize those who have made a profound impact on humanity. We count ourselves unspeakably fortunate to have been immersed in Nelson Mandela’s story and legacy. It’s been an honor to have been granted such proximity to a man who will go down as one of history’s greatest freedom fighters and advocates for justice. I have had the privilege of spending time with President Mandela and I can say his sense of humor was as great as his optimism. We are deeply saddened by his loss; our hearts go out to his family and the entire South African nation,” said Weinstein.