If you’ve heard of Peak TV — the concept that the number of shows just isn’t sustainable — you’ve probably also heard speculation that we’re over the peak. Recent retreats from scripted programming by networks from MTV to Freeform to WGN suggest that the number of scripted shows is declining.

But scripted’s loss could be reality’s gain. Even as MTV and Freeform back away slowly from scripted, they are embracing reality shows — just as TV executives did at the turn of the century when “Survivor” popularized the genre and “American Idol” went on to rule in the ratings for years. ABC’s revival of “American Idol” may be the clearest sign that TV execs think it might be time for another cycle of reality hits.

Whatever the case, reality TV — cheaper to produce than prestige dramas — looks like a safe bet in uncertain times.

“Scripted is at its peak and a staple on every network’s schedule — however, unscripted has proven itself to be a mainstay for television and is having a moment,” Freeform senior vice president of unscripted programming and development Kary Mchoul tells TheWrap. “It also allows us react to trends in a quick and efficient way that allows us to be part of the zeitgeist and puts talent in the drivers seat.”

FX Networks chief John Landgraf put the entire TV industry on notice back in 2015 when he observed that “there is simply too much TV.” He predicted that the business was in a “content bubble” and would soon see a decline in the number of scripted originals on the air, with cable networks taking the biggest hit.

His prediction seemed to come true last month, at least in part, when A&E announced that the series finale of “Bates Motel” — by far the network’s most successful original series — would mark the end of its scripted efforts entirely.

A&E’s last two attempts to launch a scripted series — Glen Mazarra’s “The Omen” sequel series “Damien” and a revival of the CBS Poppy Montgomery crime drama “Unforgettable” — both flopped, with each canceled after just one season. The network’s unscripted department, on the other hand, has had better luck. The Leah Remini docu-series “Scientology and the Aftermath” generated a healthy amount of buzz for the network and scored its top-rated series premiere in two years.

But A&E isn’t the only one rethinking its strategy in the era of Peak TV, it’s a story across the cable TV landscape as more and more networks begin to reduce their investment in scripted originals.

A report from FX’s research department released earlier this year observed a total 454 scripted original series in 2016, an eight percent increase entirely attributable to the ballooning number of series on streaming platforms like Netflix, Amazon and Hulu. Every other sector instead pulled back on scripted originals in 2016, with basic cable seeing a year-over-year decline for the first time since 2009, going from a total of 187 series in 2015 to 181 in 2016. 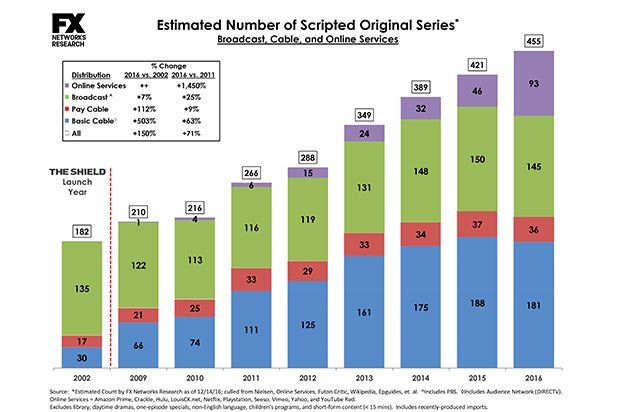 Viacom, which owns MTV, BET, Comedy Central, Spike and TV Land, among other properties, is trying to consolidate many scripted shows at a new network, the Paramount Network.

Six series are in the pipeline months ahead of the network’s launch, including the Alicia Silverstone comedy “American Woman,” the series adaptation of the cult film “Heathers,” the Michael Shannon-led miniseries “Waco” and the Kevin Costner family drama “Yellowstone.” All are set to be among the first series to premiere on Paramount next year.

“American Woman” and “Heathers” were both originally set up for TV Land. Kevin Kay, who oversees both Paramount Network and TV Land, said the shows went to Paramount because TV Land was overextended.

TV Land, he noted, was once “launching eight shows a year. The 10-o’clock shows got a lot of marketing behind them, but they didn’t have enough marketing to extend to the 10:30 shows and nobody ever saw them.”

Indeed, only “Teachers” and “Younger” have gone on to become real hits for TV Land in the last few years.

“So what we’ve done is make a very conscious decision to do four shows a year,” Kay said. 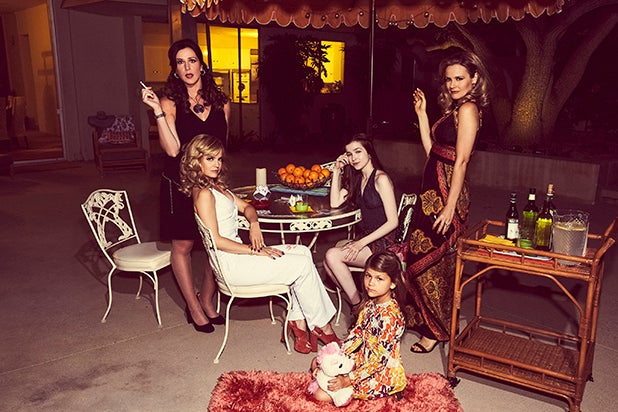 Also Read: MTV's 'Wonderland': Inside the Network's Plan to Make Itself Cool Again

Years ago, MTV left the reality series “Jersey Shore” behind to focus on scripted shows like “Teen Wolf,” which put MTV on the scripted map in 2011 and remains MTV’s biggest scripted success story. But “Teen Wolf” is set to conclude with a final 10-episode installment this summer, and there’s no scripted show waiting in the wings to take its place.

Instead, MTV is rebooting the reality staples “My Super Sweet 16” and “Fear Factor.” Scripted programming seems to be absent from its strategy for the time being, though Maggie Malina was named head of scripted in March, and insiders say the network is still open to the format.

“The Shannara Chronicles,” which aired its first season on MTV last January, is moving to Spike for Season 2. Without “Shannara,” MTV’s only remaining ongoing scripted series is “Scream,” which will return for an abbreviated six-episode season at an unspecified point in the fall.

Tribune Media’s WGN America, a relatively new player in scripted, is also backing away from the format. The network canceled “Outsiders” last month, leaving the slavery drama “Underground” as its only remaining scripted original. And with Tribune’s recent acquisition by Sinclair Broadcast Group, even that show may not see another season. Sinclair CEO Chris Ripley warned in a call with analysts last week that once the deal goes through, WGN America would be “shifting its strategy away from high-cost originals.”

That’s a markedly different vision for the network that once aspired to brand itself as a new home for prestige dramas with the launch of “Manhattan” and “Salem” in 2014.

Freeform is also reimagining its future as it prepares to say goodbye to its signature scripted series. With the impending conclusion of “Pretty Little Liars,” the network has been leaning into the unscripted realm of late, turning to alums of ABC’s “The Bachelor” franchise for its two “Happily Ever After?” shows.

Mchoul acknowledges that nabbing familiar faces from the Bachelor Nation can provide a valuable boost.

“Tying shows to a long-standing franchise is absolutely helpful for visibility,” she said. “It allows us access to an already inherent audience with engaged fans who love the property who feel like they know the talent and want to see their story unfold.” 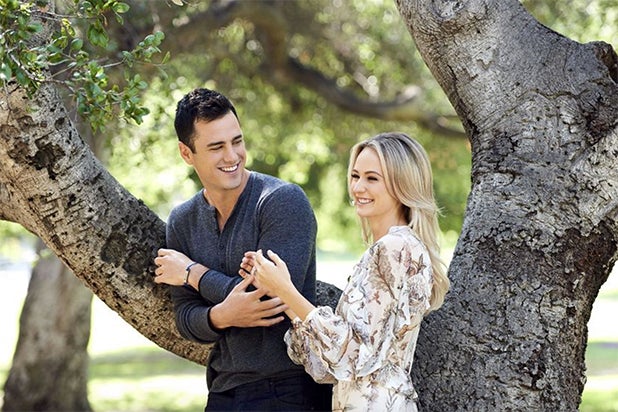 Does the shift away from scripted just come down to the bottom line?

Kinetic Content CEO Chris Coelen, whose production company is behind such hits as “Little Women” and “Married at First Sight,” tells TheWrap that unscripted shows often can “be delivered on a more cost-effective basis than scripted can — and the best shows can pack an equal or even greater ratings punch.”

So will reality rise up to claim scripted’s peak? It’s nowhere near that simple.

“The audience, wherever they are, just like to be entertained and likes a good show,” said Coelen.