If You’re Confused or Unsettled by ‘The Father,’ You Can Thank the Production Designer

TheWrap awards magazine: The look of Anthony Hopkins’ apartment is a big reason why Florian Zeller’s film about dementia keeps its audience off-balance

A version of this story about “The Father” first appeared in the Oscar Nominations Preview issue of TheWrap’s awards magazine.

Florian Zeller’s “The Father” is an intricate puzzle of a film. Based on the stage play by Zeller, it appears to be a series of conversations between a man, Anthony (Anthony Hopkins), his daughter, Anne (Olivia Colman), and a couple of other people who come in and out of Anthony’s apartment. But events change, the people might be hallucinations, and slowly we realize we’re as confused as Anthony, who is suffering from dementia.

A big part of that confusion comes from the apartment itself, which subtly changes to draw us into Anthony’s world. “Every day we were able to change a few things – sometimes the color, sometimes the proportion, sometimes the furniture,” Zeller said. “You have enough to feel that you are still in the same place, but something has changed. You can’t tell always what, but something has changed to create the feeling that you are somewhere else at the same time. It was a way to play with the set to create the disorientation of the audience, and it was a very exciting challenge.”

To spearhead the challenge, Zeller hired production designer Peter Francis. “They sent me the script before my meeting with Florian, and I always like to work it out in my head beforehand,” Francis said. “so I did a layout of how I imagined the flat would be, and when I met Florian I said, ‘Oh, I’ve done a sketch.’ He said, ‘Show me yours and I’ll show you mine.’ So I put my plan on the table, and then Florian took his plan out, and they were exactly the same. Honestly, it was uncanny.”

And as they spoke further about the role of the set, Francis was thrilled. “Florian said he wanted the apartment to feel like it’s the other character in the story, which of course made my eyes light up,” said Francis, who designed Anthony’s apartment in such a way that it could also be Anne’s apartment, or a doctor’s office or a long-term care facility — but at times, the changes were so small the audience would barely notice.

“We had to try and make those four different spaces feel the same but different,” he said. “The whole point was to just subtly say, ‘This is a different place but it’s the same,’ and hope the audience didn’t notice it too much. But at the back of their minds, there’s something there that isn’t the same as it was in the previous scene.”

When designing the space, he said, he kept in mind how people recognize the rooms they’re in. “We perceive a space depending on the color and the furnishings and the paintings on the walls and things,” he said. “We put furniture in certain places, and the paintings went in the same places in each apartment. They were different paintings, but we hung them in the same arrangements so that you don’t notice it. It was quite complicated.”

One key was doctor’s office chairs that make an appearance in Anthony’s hallway at a certain point; another was multiple distinctive doors in each room. “If he’s standing at a door, you don’t know which door he’s standing behind or which entrance he’s coming through,” he said. “That helped with the disorientation in the film, so you’re not quite sure where you are.”

Here are two photos of the same hallway, dressed to represent different spaces: 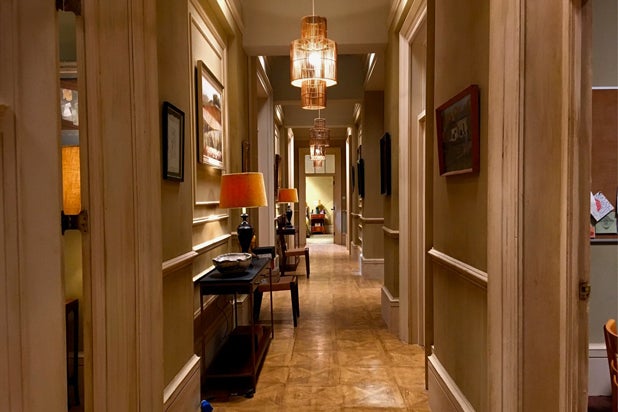 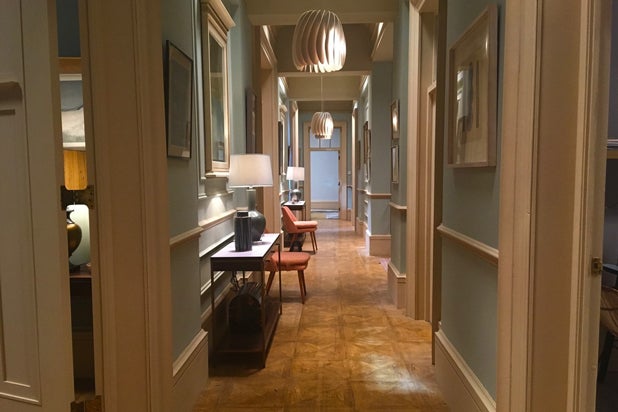 He also worked to make the space feel increasingly claustrophobic as the film goes on, though he didn’t have much time to rework the spaces during a five-week shoot on a tight budget. But his job, he admitted with a laugh, wasn’t as difficult as the script supervisor in charge of continuity on a film that kept deliberately changing things.

“The continuity was done by an amazing lady who had to do a timeline for the story,” he said. “But how on Earth do you work out where things take place and what’s he wearing in this scene that he wasn’t wearing in that scene? Was the lamp on the table in that scene? And does it matter? We don’t know where we are, we don’t know if this was five years ago or two days ago or an hour ago.”

To guide himself in the job, Francis decided early on that the film was about memory, not about specific events. That helped him put a spin on one of the biggest lessons he’d learned about design. “Stuart Craig, who is one of the best production designers in the world, once said to me, ‘When you’re designing something, it has to make sense. There has to be a reason for it,'” he said. “We had our architecture, which sort of made sense, but then it was all about turning it upside down and inside out. If we’ve helped confuse the audience, then we’ve done our job.” 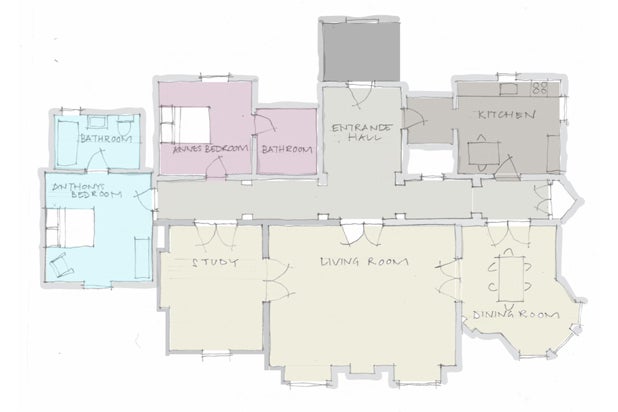 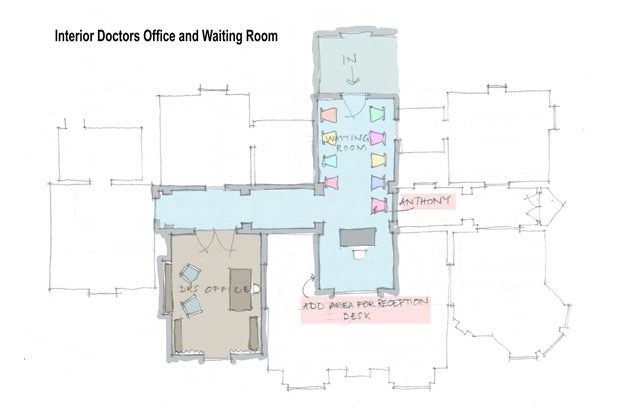 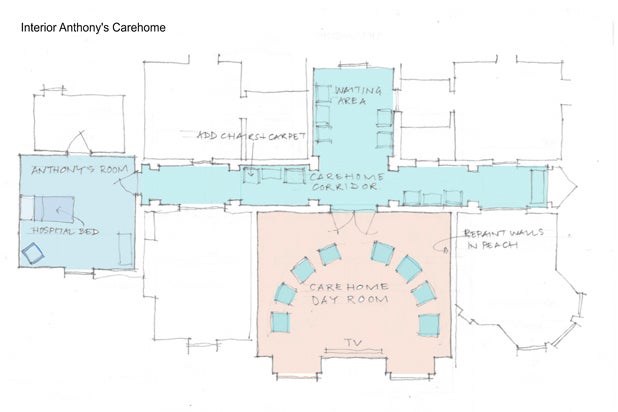