Roger Ebert refused to use his star system to rate “The Human Centipede,” saying “It is what it is and occupies a world where the stars don’t shine” – and now the film’s distributor, IFC, has created a whole new genre label to showcase that world, and spotlight movies like Tom Six’s gruesome horror tale. 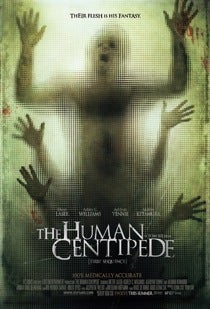 “The Human Centipede,” which has variously been described as “a stomach-churning joy” and “idiotic, exploitative and sickening,” and has a 48-percent positive rating on Rotten Tomatoes, was released in theaters on April 30 but will premiere in VOD on IFC Midnight this month. Other films to be included in the series in upcoming weeks:

The idea, says IFC, is to create a brand that extends the success of past IFC releases like Lars Von Trier’s “Antichrist” and the Nazi zombie film “Dead Snow.”