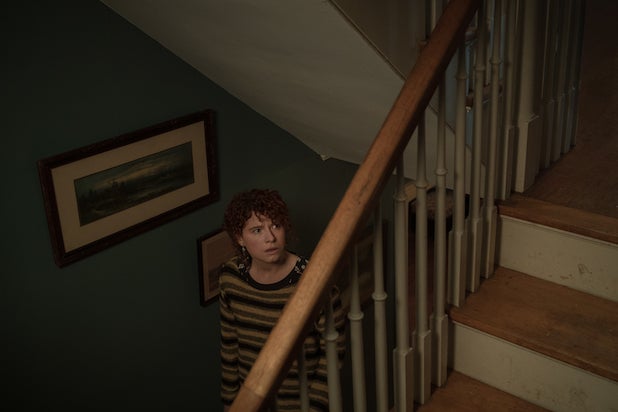 Hey, you know that big new movie by the celebrated director that plays around with notions of time and space and is maddeningly hard to understand?

No, not that one. The other one. The one you can see without leaving your house.

It turns out that Christopher Nolan is not the only director making long, stylish brain-teasers these days. There’s also Charlie Kaufman, writer of “Being John Malkovich” and “Eternal Sunshine of the Spotless Mind” and director of “Synecdoche, New York” and “Anomalisa,” whose “I’m Thinking of Ending Things” premieres on Netflix on Sept. 4.

Kaufman’s film is about 15 minutes shorter than Nolan’s two-and-a-half-hour epic “Tenet,” and it doesn’t get into that film’s sci-fi or action-movie territory. But it delights in whipping up a dense, thorny narrative in which a young woman’s trip to meet her boyfriend’s parents ends up as a deliciously confounding meditation on and exploration of identity, projection and, well, everything from pigs to paintings to Pauline Kael’s thoughts on “A Woman Under the Influence” (delivered by another character without attribution) to Act 1 of “Oklahoma!”

The Iain Reed book on which “I’m Thinking of Ending Things” is based ends with a paragraph that essentially suggests the reader go back to the beginning and read it again, and it’s possible that would be a good strategy with the movie as well.

But it’s also fine to bathe in befuddlement as you watch a film in which a character can change names and occupations from one scene to the next, in which walking up a flight of stairs can take you into another time, in which a frozen dessert becomes a totem of unimaginable significance and a high school hallway can be as freaky as the Black Lodge from “Twin Peaks.”

Before it’s over you may start to wonder whose story this really is, but “I’m Thinking of Ending Things” starts out with a young woman (Irish actress Jessie Buckley) being picked up by her boyfriend, Jake (Jesse Plemons), for a trip to meet Jake’s parents at the farmhouse where he grew up. She utters the title phrase in voiceover, which she also uses to explain that Jake is a nice guy, but she knows the relationship isn’t really going anywhere.

She doesn’t want to come out and tell him quite yet, but Jake seems attuned to her thoughts: No sooner has she used the phrase “the child is the father of the man” in her voiceover to us than Jake asks if she likes Wordsworth, who put the phrase in a poem in 1802.

Their conversation is a little tentative, a little strained, and Kaufman’s camera backs off: For most of the drive, which takes up a good chunk of time, Buckley and Plemons are shot from outside the car, through flapping windshield wipers or blowing snow. Even when she cuts through the awkwardness by reciting a devastating poem (“you come home with your mutant gifts to a house of bone”), in a voice drained of everything but despair, we’re watching from a distance and wondering who these people are.

And when they get to Jake’s parents’ house, things only get murkier. His mother and father, played by David Thewlis and Toni Collette, are on one level overeager parents working hard to put on a good face for the new girlfriend. But the dinner gets more and more surreal as the night goes on, and the characters morph accordingly. The details should be discovered in the watching, but things, and people, change from room to room and even inside a room; before long, bizarrely awkward turns to downright creepy and unsettling, though never without a tinge of black comedy.

It also helps that the performers are as skilled as Thewlis and Collette, who are masters at finding different shades of unsettling, and as Buckley and Plemons, who are up to the nuances of the very intricate dance they’re asked to engage in.

By the final stretch of the film, set in an abandoned (or is it?) high school in the dead of night, the comedy fades and the creepiness increases and an original dance scene very much based on the “Dream Ballet” from “Oklahoma!” makes an unexpected but not inappropriate appearance. The weight of a lifetime begins to settle and refract through memories and delusions, and what has been haunting and eerie turns obstinately, stubbornly and gloriously crazy.

If you’re trying to follow it without having read the book, it may not make a lick of sense – and even if you have, Kaufman goes in directions that Reid never did. But as funhouse meditation on who we are and how others figure into our identities, it trots out many of Kaufman’s old obsessions in a way that feels fresh and weird.

“I’m not sure if I follow it,” says one character at the end of Reid’s novel. “I can’t tell what’s true and what’s not. And yet …”

Occasionally infuriating but richly perplexing, Charlie Kaufman’s “I’m Thinking of Ending Things” lives in the space after that “and yet.” It’s not the most comfortable space in which to hang out, but it’s a hell of a place to visit.