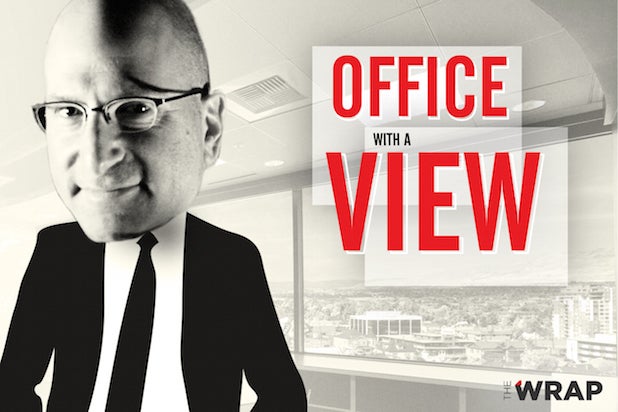 While moviegoing is in spiral, one corner of Hollywood’s box office landscape is defying the downturn: IMAX.

In the face of overall revenues last year of just $10.3 billion, a five percent dip from 2013, the colossally-screened exhibitor has seen exponential growth. In 2008, IMAX introduced “The Dark Knight” to 147 theaters. Four years later, IMAX splashed “The Dark Knight Rises” in 600 theaters.

Today, IMAX plays on more than 800 screens in 60 countries. And while IMAX’s earnings won’t be made public until February, the company has already logged its third commercial film to cross the nine-digit mark: “Interstellar,” Chris Nolan‘s sci-fi opus, took $185 million — more than $100 million of it in IMAX.

See photos: Best of TheWrap's ‘Office With a View'

In our latest installment of Office with a View, Greg Foster, senior executive vice president and CEO of Imax Entertainment, spoke with TheWrap about why, at the box office at least, size matters:

TheWrap: Box office took a beating last year, though your numbers continue to rise. What’s the secret?
Greg Foster: It was a good year. Not a great year, but a good one. We had some big movies, particularly in the second half of the year. “Transformers” was very strong in China. “Guardians of the Galaxy” was strong everywhere. I’ve run out of ways to describe how excited we were about being a part of “Interstellar” (much of it shot on IMAX cameras). And if you look at “The Hobbit,” it doubled the box office of every movie over the Christmas season.

“Guardians” was something of a risk and surprise.
That movie solidified rapport with Marvel and Disney. In early July, we showed 17 minutes exclusively in IMAX, free during the week, to give people a feel for the movie. When you look at tracking, that word of mouth really began kicking in then. It was a bit unknown at the time, and we unleashed the characters. We signed up (to carry the film) quite far in advance, so we had a chance to be integrated in the marketing campaign that contributed to the success of the movie.

How so?
What distinguishes us is that we are an end-to-end solution. We don’t take a hard disk of a movie 24 hours before its release and put it on screen. We start working on movies more than a year before the first frame in even shot. We’re often in the process, with filmmakers. We can alter aspect ratios and sound systems. We don’t design the movie; the filmmaker does that. Our job is, in any way they like, to create the experience for how they want the movie to be seen.

How do you see the growth of video-on-demand like “The Interview” affecting business?
There’s definitely something going on. With that said, you can’t pay attention to what everyone else does. But there’s no hiding from the audiences these days, particularly the millenials, three of whom are my sons. They want to go to the movies, but they want something they can’t have at our house. As long as exhibitors create an experience that distinguishes itself from everything else, they’ll go. When it’s ubiquitous, they won’t. (Moviegoing) is not a given anymore.

Box office has taken a particular lump with teens and young adults; how do you reach them?
What social media has done is create digital omnivores: 15-30 year-olds with tablets, computers and smartphones. They’re wired. It isn’t hard to get through to them. The trick is in making an impression to enter the marketplace in a flurry, so the die is cast. I don’t believe a 30-second commercial a week before the movie comes out can move the needle in the same way as in the past.

What kind of movies play best on IMAX?
An action movie that is compelling and exciting and dramatic, but still a little bit of a twinkle in the eye. It doesn’t take itself too seriously. That’s the sweet spot we’re finding.

Given the ever-rising cost of movie admissions, why isn’t IMAX hurt by premium ticket prices?
It’s an insurance policy, a security blanket, when you can promise it’s going to be fun and compelling. If you offer a premium product, people will pay for the label. You just have to deliver on your promise.