(Warning: This post contains spoilers for the finale of “Impeachment: American Crime Story.”)

The third season of Ryan Murphy’s “American Crime Story” came to a conclusion with the 10th episode of “Impeachment” on Tuesday, an hour that itself ended with character-defining scenes for the fictionalized versions of the two women most central to its story: Monica Lewinsky (played by Beanie Feldstein) and Linda Tripp (Sarah Paulson).

When deciding how to end this based-on-true-events story when the ramifications of former White House intern Lewinsky (a producer on this series) and President Bill Clinton’s (played on the series by Clive Owen) affair and his subsequent impeachment are still being felt to this day by the those directly affected by the scandal, not to mention the impact left on United States history, FX’s “Impeachment: American Crime Story” creator Sarah Burgess says she was “driven to near madness.”

“In roughly the middle of the episode, we do go through the final stage of our story with the Clintons,” Burgess told TheWrap, noting how Owens’ Bill Clinton and Edie Falco’s Hillary Clinton are not seen again past that point, which is also true for Annaleigh Ashford’s Paula Jones. 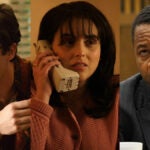 She continued: “A decision was made — and there was a time where I thought about going into the future. No. 1, it’s hard to resist writing about Linda Tripp’s Christmas store, and it’s like something that I’ll never recover from that I couldn’t write like a million scenes set in that. I don’t know why, but I could write a million scenes for her helping people find different ornaments to buy. And now that the Tripp Family apparently loves the show, we clearly could have actually gone and shot there. Anyway, the point is, I thought about that. And then obviously, with Monica, of course I thought about all that Monica’s life has contained since this moment, and all the different stages, and, in my opinion, this sort of wonderful reemergence and resetting of a narrative that she herself has done, years prior to us doing the show. Was there room for that? But I think this is a story that ends after the impeachment — not too far after, I had to do some condensing of time — and in the period we were telling the story the whole time.”

Burgess explained her reasoning for how the finale, titled “The Wilderness,” was constructed to end with juxtaposed scenes of former friends Linda Tripp and Monica Lewinsky, and detailed why she didn’t shift to the present day, where Tripp is deceased and Lewinsky has worked to change her public reputation. 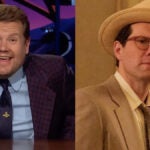 You can read her answer in full below:

“I think the sort of pain and discomfort of that is important and important to me to write a story that didn’t feel like it lied about how painful and uncomfortable and unfair all of this was. … So Act 5 only contains scenes with Linda and Monica. You know that Linda Tripp got serious plastic surgery, right? She got that surgery not too long after the events of the story. I want to say it was in late 2000. But It was not five years later. So if this was fiction, you almost wouldn’t write that, because it feels a little too on the nose. But Linda’s, perhaps, discomfort with her identity and perhaps some discomfort with what she did — not to mention her inability to really go out in the world, leads her to do that. I don’t think I would ever fictionalize that, if that makes sense. But that fact that it happened was too compelling for us not depict that. So that happens in the final act of the show. And then Linda started doing interviews around this time and we have a scene that I wrote inspired by some of those interviews, where you could tell journalists really wanted to press her to admit that she regretted what she did. And after her experience with the grand jury, where she is now on a slightly different stage, looking like an entirely different person, I was very interested in this question of, what is inside Linda? What does she privately know herself about what she did and what is she actually willing to say out loud? So I wrote the scene where Linda is, as she did in the press, Linda is saying things that make it sound like she does not regret what she did, but it was important to me to write a scene where Linda Tripp speaks that way when pressed by a journalist, because we feel in the performance and in the way the scene is directed, all of Linda’s complicated emotions around what she’s experienced and what she did over the past couple of years. That scene gets into how she could feel for the rest of her life, and what she would carry for the rest of her life about what she did, even though I know very well, because I was obsessed with finding this, that in public, Linda never said entirely and completely that she regretted what she did. And I, myself, was just obsessed with that.

“And then you have Monica, who is now living in New York. She has a book out. Her book, ‘Monica’s Story,’ was released in 1999, and she is on a book tour and she is incredibly famous. There’s a video of Monica at Harrod’s in London, in the book department at Harrod’s, and you feel some of the unhinged, overwhelming press attention and public attention on her, frankly. The crowds that appear just to see her and scream her name. The flashes, the shouting of rude questions. So I wrote a scene inspired by that. We see Monica and Linda both sitting out in the world. Linda, in this interview with this reporter trying to pin her down and make her say she regrets it. And then we see Monica out in the world, attempting to be this public Monica and be a good sport and sign these books, the book that she had to do because she needed money for legal fees. And she is trapped in this fishbowl as people stare at her. And it’s overwhelming. And that Harrod’s video that I referred to, you can see real Monica becoming emotional and uncomfortable. And it makes her cry a little bit because it’s so much and you feel for her a lot, because she did not choose to be in this situation and it’s just overwhelming. So the final moments and the final shots are about Monica trying to be public Monica in the world. And this person who we met at the beginning, who is this nice and hopeful intern in the beginning of Episode 2, going to work in the White House, and with any life ahead of her possible, now is in this volatile and overwhelming situation. And the last moments are intended to get at some of her internal emotional state, just as the Linda ones are, as she tries to find a way through and she tries to find a way to tell herself that she’s OK in the midst of all of this. We see her step away from it and try to get a minute to herself, which is something that is hard to come by for her.”

Those who don’t have access to FX through a cable provider or service that includes the channel, like Hulu + Live TV, will likely not get around to seeing the “Impeachment: American Crime Story” finale — let alone the entire 10-episode season — until the show finally becomes available for streaming later this year on Netflix, due to a deal struck between the streaming service and FX’s former owner, Fox, in 2016.

We asked Burgess if she’s prepared to rehash the story all over again in 10 months, when “Impeachment” is likely to resurface in a more significant way in social-media conversation due to its inability to be streamed next-day currently and the bump many shows receive when they become available on Netflix.

“I have a lot of thoughts about this,” Burgess said. “I feel proud of the show. I feel that all of the different reactions to it have been as complicated and fraught and fascinating as the event itself. At a certain point– like, my agent was yelling at me yesterday to move on because I was like, ‘Great news! Allison Tripp loves the show.’ She’s literally like, ‘Please stop. If you don’t stop doing this, I’m going to lose it.’ But it’s hard, because there are parts of it especially that I feel very emotionally tied up in. So I would be happy for any and all reactions to continue in any form. And when/if it airs in Luxembourg in 2027, then I’ll be there for all those reactions. I’m sure it will be a huge hit there, finally. I guess I am kind of prepared. But at the same time, I’m taking all that I learned to sort of figure out how to write again. But I’m glad that you asked the question, because it implies that you think that that will happen. It’s fascinating, the cable versus streaming thing. It’s so interesting.”