James Corden is possibly “Impeachment: American Crime Story’s” No. 1 fan. And in his latest recap of Ryan Murphy’s FX anthology covering the Monica Lewinsky-Bill Clinton scandal, he revealed his absolute favorite part of the season so far: Billy Eichner’s portrayal of Matt Drudge.

“Now this week, we also got introduced to Matt Drudge, the mastermind behind the popular news and gossip website The Drudge Report, played by the brilliant Billy Eichner,” Corden said during Wednesday’s opener of “The Late Late Show.” “Here he is here, leaving work.”

OK, so for those who have seen both “Impeachment: American Crime Story” and any of Corden’s outdoor segments, like his “Crosswalk The Musical” bits, you’ll notice pretty quickly that the CBS Studios building is one in the same. 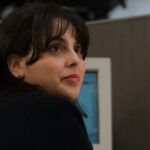 “That’s the building we’re broadcasting from right now! Can you believe it? Guys, we did it, we’re finally on TV!” Corden said. He added, “By the way, it’s weird to see Billy on a street and not doing this,” before rolling a clip of Eichner screaming at someone in an episode of “Billy on the Street.”

The location is important not just because it makes Corden giddy, but because it’s integral to the plot in “Impeachment,” a story that sees Matt Drudge’s roll in revealing the then-president’s affair with the former White House intern.

“Now, one of the ways that Matt would find classified information for his internet newsletter is by moonlighting as a manager at the CBS Studio gift shop and digging through the office dumpster after his shift,” Corden said. “I mean, Matt’s lucky he wasn’t working at CBS today, because if he were, all he’d find is Reggie’s empty salad boxes, pairs of my old Spanx and rejection letters to Nick from various podcasts in Malaysia.”

“Matt Drudge is a deep and enigmatic character full of drama. In fact, he’s so dramatic, that even when he sends an email, he has to put on a fedora,” Corden said, before showing a scene where Drudge does just that.

“That reminds me, actually, I’ve got to cancel my dinner plans tonight,” Corden joked, putting on a fedora himself before typing out a text.

Elsewhere on “Impeachment: American Crime Story,” Sarah Paulson’s Linda Tripp and Beanie Feldstein’s Monica Lewinsky have a conversation regarding Lewinsky’s infamous blue dress that Bill Clinton ejaculated on, a conversation that drives Corden mad when Tripp asks, “How did it get on there?”

“What do you mean how did it get on there?” Corden said following the “Impeachment” clip.

Lewinsky then tells Tripp she hadn’t even noticed it at first: “I went out to dinner that night with friends, and when I got home, I changed and assumed it was guacamole.”