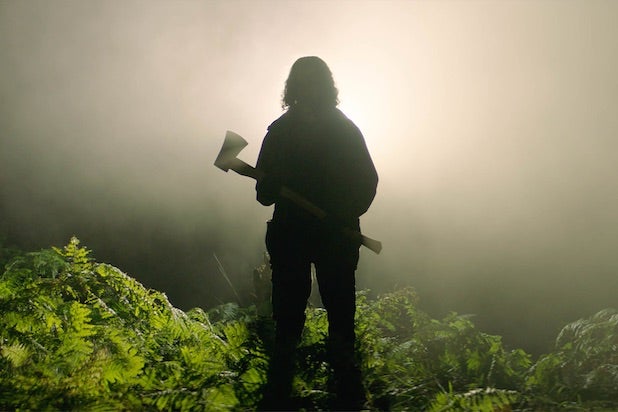 Two of Friday’s Sundance Film Festival premieres are movies that their directors envisioned as a way to keep busy and make art during the pandemic lockdown, and they both deal with a lot of people dying. But beyond that, there’s not a whole lot of common ground between Daryl Wein and Zoe Lister-Jones’ “How It Ends” and Ben Wheatley’s “In the Earth,” which take markedly different approaches to catastrophe and to COVID-era moviemaking.

While “How It Ends” is a cheery movie about the end of the world, filmed in a socially-distanced manner on the streets of Los Angeles, “In the Earth” takes the British director Wheatley back to his roots as an indie horror director (“Kill List”). Made between his Netflix remake of Alfred Hitchcock’s “Rebecca” and his upcoming sequel to “The Meg,” it was shot in 15 days, mostly outside, during the pandemic with a small cast and crew and safety precautions in place.

But that’s the only sense in which you’d use the word safety when talking about “In the Earth,” because this is a messy, creepy and at times deliciously nasty concoction that takes myth and legend and fuels it with currents of dread that may feel familiar to anyone who’s been paying attention for the last year.

Also Read: 'How It Ends' Film Review: It's the End of the World as We Know It, and You'll Feel Fine

The film, which comes into Sundance with distribution from Neon, uses a pandemic – not necessarily our particular pandemic, but maybe – as a jumping off point into a tale of horror in the woods that gets more unhinged the further it goes, and less interesting the more it tries to explain.

It starts in a bucolic countryside, where Martin Lowery (Joel Fry) is walking down a country road. But when he gets to “the lodge,” a nondescript scientific establishment of some sort, he’s disinfected and debriefed by masked attendants; a year into an unspecified pandemic, you can’t be too careful.

Martin’s destination, though, is out in the woods somewhere, where he’s apparently going to continue his study of crops. Jenny Pesco (Ellora Torchia) will guide him on the two-day walk, but first he peruses some drawings of a forbidding creature called Parnag Fegg, who according to local folklore is the spirit of the woods. “People get a bit funny in the woods sometimes,” he’s warned. “You would do well to be afraid. It’s a hostile environment.”

And yes, it sure is. The woods get weirder and noisier the further Martin and Jenny walk (are those birds, or screams?), until they’re attacked in the middle of the night by unseen assailants who leave them shoeless. And then they meet Zac (Reece Shearsmith), a grizzled but amiable type who chats away pleasantly as he stitches up a gruesome cut on Martin’s foot, somehow making it look more gruesome in the process.

Being characters in a horror movie, Martin and Jenny seemingly decide to trust Zac, which of course doesn’t turn out too well: Before you know it, they’re drugged and tied up to be used in some kind of ritual that’ll help Zac communicate with the spirit of the forest. There’s a morbid kind of comedy in this – a homicidal maniac chatting away as if it’s the most reasonable thing in the world to indulge in amateur amputation with an axe or creative photography that occasionally requires the use of small intestines.

And if you don’t mind the axe or the intestines or the insanity and silliness that’s whipped up into a frothy, messy phantasmagoria, “In the Earth” can be gruesome fun; it goes off the rails, but that’s the point.

Eventually, the craziness tries to explain itself: They’re not just using old mystical rituals to commune with the voice of the forest, they’re using science to do so. So says Dr. Olivia Wendle (Hayley Squires), a former colleague of Martin’s, who shows up and attempts to let them in on what’s going on in a way that sounds reasonable. The trouble is, reasonable explanations just deflate the over-the-top brutality and absurdity that was the film’s calling card; the talkier it gets, the less immersive it becomes. Really, Dr. Wendle should have shut up after one of her first lines: “I won’t try to make any logical sense of this.”

Sure, Wheatley’s blend of assaultive high-tech gadgetry and supernatural silliness does occasional reach a kind of glorious insanity – a kind of “don’t mess with Mother Nature” on steroids – but it does so without ever becoming satisfying. It probably would have killed at a packed midnight screening in Park City, but at sea level it eventually settles for being stylish, cringe-inducing, occasionally scary and a little annoying.

Still, it gave Wheatley a way to keep busy during the pandemic – and despite the fact that its setup is rooted in the virus, by the end of “In the Earth” you’ll probably have forgotten all about lockdown protocols or infection rates, though you might find yourself reconsidering that stroll in the woods.