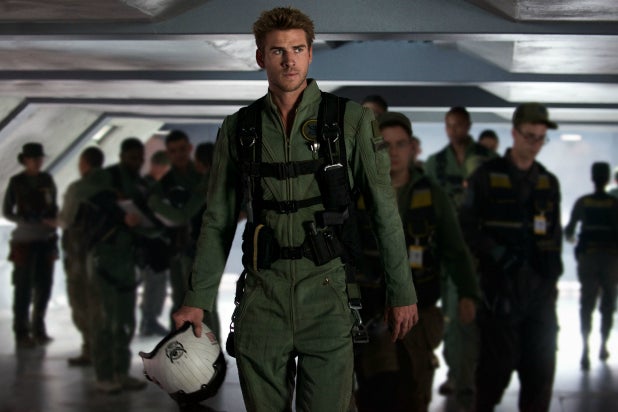 It’s been 20 years since the groundbreaking “Independence Day” rocked Hollywood, and its sequel is hitting theaters this Friday.

But critics just can’t seem to agree on whether “Independence Day: Resurgence” is any good or not.

Currently holding a score of 44 percent on Rotten Tomatoes with a pretty even mixture of fresh and rotten reviews. Some critics mention the “rushed” storyline and “uncharacteristic disappointment” from director Roland Emmerich, while others call it a “fun, old-fashioned disaster pic” and even “infectious.”

“While it would be foolish to say ‘Independence Day: Resurgence’ lacks scale and spectacle in this age of the blue-screen blockbuster, scene after scene of the stuff becomes repetitive and soulless due to its victimless violence,” said TheWrap’s film critic Jason Solomons. “It feels like no one ever really dies or gets hurt, despite the destruction of half the planet.”

The sequel is looking to make $50 million when it opens in theaters this weekend — its budget was an estimated $165 million.

The first “Independence Day” movie starring Will Smith opened in 1996 to $50.2 million and went on to become the No. 1 movie of the year, earning $817.4 million worldwide.

“Because there’s so much going on, often the story line appears rushed — it can’t be coincidence that every chance he gets Hemsworth’s Jake opts to use the super-speedy fusion drive in the space aircrafts, surely — with characters arriving at cocksure decisions as to how to beat the aliens with no real explanation as to how they got there. The plot falls back on typical sci-fi tropes way too frequently too, with talks of queens, hives and even a downright silly deux ex machina situation towards the end. It’s a far cry from the pretty original content we saw before.”

“‘Independence Day: Resurgence’ is packed so full of cheese, explosions and too-convenient plot-twists it could sink a ship; yet it all adds up to a fun, old-fashioned disaster pic, made with such confidence and heart that it’s time we finally blast the guilt into the stratosphere where it belongs.”

“It’s an uncharacteristic disappointment from the normally reliable Emmerich, and it leaves the final moments of the film, which point to a second sequel this time set in space, sounding more like a plaintive request than a promise. And with a movie as strangely uneven as this, Earth might be safe from interplanetary molestation — for a while, at least.”

“Emmerich has gone all out to recapture his ’96 mojo and, for the most part, succeeds. While the occasional call-back clunks (Jessie Usher as orphaned-son-of-Will-Smith Dylan Hiller fails to sell the line, ‘Get ready for a close encounter, bitch!’, but we’re not sure who ever could), other riffs prove sonorously nostalgic. And we’re not just talking about another death-defying dog. Whether it’s Goldblum reliving his co-pilot jitters in another spacecraft, Bill Pullman pulling on his flight suit once more as PTSD-stricken ex-president Whitmore, or Brent Spiner making a welcomely deranged return as surprisingly not-dead professor Brakish Okun, you’ll likely thrum with the same sweet, not-able-to-take-it-too-seriously joy you felt during the first film.”

“A reboot quite without the first film’s audacity and fun. The plot’s potentially interesting dependence on the idea that there are aliens who are allies as well as enemies is lost in a tiresomely written muddle – an all-but-plotless melee of boring digital carnage. The first film was a creature of the pre-digital age when the spacecraft on screen were mostly physical models, but it can’t be entirely the fault of our digital age that this film has no real sense of excitement and awe. It’s a movie that is going through the intergalactic motions.”

“‘Independence Day: Resurgence’ doles out the action and effects work in carefully measured, incremental doses, which give the film a cumulative tension almost despite itself. Even if it’s hokey and jokey, this is a loud, effects-driven piece, with a driving score. For fans of Roland Emmerich disaster movies, it both hits all the marks, while delivering nothing new. Yet in today’s global marketplace, that should be enough to deliver the commercial payload.”

“Emmerich’s glee is infectious as he trashes Big Ben but leaves the rebuilt White House standing, and there are few things on earth cooler than Jeff Goldblum exasperatedly explaining how doomed humanity is, again. But it’s all too much too fast, and the cumulative effect is like watching a two-hour trailer – more dizzying than thrilling.”

“There remain too many plot holes, and a contrived means of interweaving narratives, and while a huge suspension of disbelief is concerned when watching a film of this nature, the way the characters keep bumping into one another is just absurd. Some of them are on the moon for crying out loud. Susan Sarandon was said to have turned down a role in this film for she found the script to be incomprehensible – and having now seen the finished product, it’s rather easy to see what she meant.”