Disney announced a slew of release date changes on Monday, including (hilariously) yet another delay for “Indiana Jones 5.” The currently untitled sequel was first set for release in 2019, and has now been delayed four times to its new release date of June 30, 2023. Which means that when the “Indiana Jones” sequel finally hits theaters, star Harrison Ford will be weeks shy of his 82nd birthday.

Ford’s age and the “Indiana Jones” sequel have been something of a running joke over the years, as a fifth film in the franchise has been rumored ever since the 2008 release of “Indiana Jones and the Kingdom of the Crystal Skull” yet tricky to actually materialize. Ford was already 65 when the fourth “Indy” film was released, and as development on “Indiana Jones 5” seemingly stalled out in the ensuing years, many figured Ford would be replaced in the role with a reboot featuring a younger actor.

And yet, images from the set of “Indiana Jones 5” have shown that Ford can still wear the hell out of that iconic outfit and fedora, and the actor has been effusive in his eagerness to return to the role. 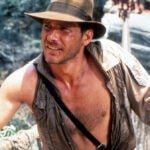 Steven Spielberg – who directed the previous four “Indiana Jones” films – was originally set to direct “Indiana Jones 5,” but after a couple of release delays he stepped back from the director’s chair and moved on to “West Side Story.” Spielberg is still involved as a producer on the sequel, but James Mangold – the filmmaker behind “Logan” and “Ford v. Ferrari” – is directing the film.

Production on “Indiana Jones 5” finally began this past June, with Phoebe Waller-Bridge and Mads Mikkelsen joining the cast alongside Ford. And while filming has seemingly been proceeding on schedule, Disney has opted to push the film’s release date from July 2022 nearly a year back to June 30, 2023 – 13 days before Ford’s 82nd birthday.

And yet, as Ford proclaimed in his initial appearance as Indian Jones in 1981’s “Raiders of the Lost Ark” at the age of 38, “It’s not the years, honey. It’s the mileage.”