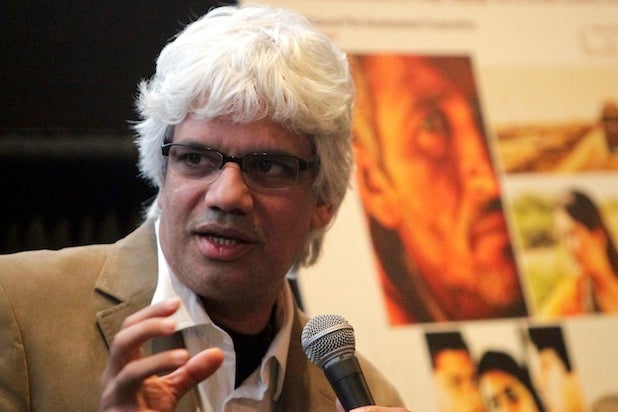 No one will be mistaking the Indian submission for the best foreign film Oscar, “The Good Road,” for a Bollywood production, even before it doesn’t get to the first musical number. More apt comparisons for writer-director Gyan Correa’s triptych feature are tough-minded, multi-narrative dramas from other countries, like “Babel.”

As it turns out, first-time helmer Correa has not lacked for points of connection with the Bollywood world, in his previous life as an ad-man.

“When I started making commercials, I had a lot of offers to do feature films in India — but essentially in a space like the Bollywood space, and I don’t want to be there,” Correa said after TheWrap’s awards series screening Tuesday at the Sundance Cinemas.

India’s predominant genre is “not my kind of film,” he further explained to Steve Pond, TheWrap’s Oscars columnist, in a post-screening Q&A. “I think Bollywood has got its own audiences and that’s great. In commercials, I deal with that world all the time — (with) a lot of the actors and big names. But for a feature film, I think it’s a little sacred or something, to work with (the medium) differently.”

Also read: TheWrap Screening Series: How Scott Cooper Hooked Casey Affleck With ‘Out of the Furnace’

Correa’s feature debut is, as the title suggests, a road movie, with intersecting stories that involve a well-to-do couple who lose their son at a rest stop, a pair of slightly shady truckers who reluctantly pick up the boy, and a homeless pre-teen girl who unwittingly settles in at a roadside whorehouse. The director admitted that a three-pronged narrative had turned out be a lot to bite off for his first movie.

“It’s very tricky to balance three stories and get the flow right,” said Correa, who added with a laugh that the only thing he was certain about going into the future is that “my next film will not be three stories — of that, I’m sure. If I was to revisit that decision.”

Pond asked if the director ever truly regretted taking on that much storyline.

“Not just in the writing process, but in the editing process, right up to the last minute!” Correa chuckled. “But this is the highway, and there are all these images and experiences that kept coming alive for me. To tell you the truth,” the director finally counter-confessed, “I would have liked to include more stories.”

Correa really did hit the road, at length, before writing the script.

“When I first started my road trips, I didn’t think I would be filming anything, because funding for these films is not easy where I come from,” he told Pond. “So I thought I should just get out and travel. But I met these fascinating people and their stories, and I felt it had to come across in a film. I’ve always felt that roads are a kind of artery of the society, and the people on the roads that I traveled on in India, their stories are never told, at least in contemporary cinema. It’s all these different cultures and economic groups coming together on the highway and co-existing together.”

As if the convoluted narrative weren’t challenge enough for a first feature, Correa also chose to give the most screen time to the non-actor who plays one of the truck drivers. Shamji Dhana Kerasia “is driving on some dusty road right now,” the filmmaker assured the audience.

“I keep telling myself it is easer to put a truck driver into an actor rather than the other way around. He’s one of the most emotionally intelligent men I’ve met. And he just has this incredible capacity to understand what we were trying to do – without, by the way, ever having seen a feature film in an auditorium! That’s a fact.”

Casting someone who’d never even seen an entire movie before as a lead had its interesting moments.

“Right through the process he didn’t understand film,” said Correa. “He didn’t know what we were doing.” So for each take, Correa opted to never say “cut” during a scene but always “play it through to the end.”  When it came time for looping, “there were some bits we had to dub in a studio, so when he saw his image on the screen, he was freaked.”

India’s choice of “The Good Road” for its Oscar submission has raised some controversy, partly because it has no U.S. distributor — in fact, the Tuesday night Wrap screening was its first American public showing — whereas the Cannes favorite “The Lunchbox” was considered a more viable contender thanks to its Sony Classics deal.

Even the director of “Lunchbox” joined in and cried unfair … while admitting he hadn’t seen “Good Road.” A backlash to the backlash has set in, with some defending India’s National Film Development Corp. (which produced both films) for picking the underdog that’s perceived to have less American commercial potential.

“The Good Road” has only played commercially in the province in which it’s set, Gujurat.

“This is a regional film,” Correa explained. “India is like the U.S., with many states, but each state has its own language,” which makes true national distribution difficult. “The mandate of my producer is to promote regional film, (with) the objective first to make a film that is critically acclaimed, etc. It did well in Gujurat, but if you’re comparing it to Bollywood, it can’t even begin to compete in terms of production and release.”

As for how it successfully competed for India’s coveted Oscars slot, “I have seen the other films that were in contention, and I’m glad I didn’t make the choice, because they were all damn good,” Correa said. “What’s nice about the films is that each of them has got a different perspective and voice, but none of them are silly. It was particularly sweet that this film was chosen in a year when there were so many great films in the Oscars process.”