Hayes Grier, an internet personality and former “Dancing With the Stars” contestant, was arrested Friday in Charlotte, North Carolina, after authorities say he violently assaulted a man on Monday and stole his cellphone.

According to public documents, the 21-year-old Grier (né Benjamin Grier) was detained Friday afternoon in Charlotte before being released overnight after posting a $17,500 bond. 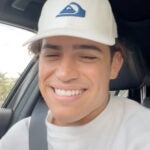 In 2015, Grier became the youngest male contestant to compete on ABC’s “Dancing With the Stars.” The then-15-year-old finished in eighth place on the show’s 21st season.

The eldest Grier brother is Carolina Panthers backup quarterback Will Grier. The family had its own reality show, “Top Grier,” on the Verizon Go90 app, which premiered in 2016 and lasted for three seasons, according to IMDb.

Grier is scheduled to appear in court at 9 a.m. Monday.