Ingraham’s point of contention was that, to her mind, President Joe Biden and his administration “played” Republicans with the bill. She said, “The White House is, as I said, quite giddy about this. Reuters describes this as a ‘glide path’ to the $3.5 trillion tonight and they write this up, Senator.”

Cassidy responded by bringing up the people of his state, Louisiana, and sharing his concerns that they are worried about impending flooding or want a better job. 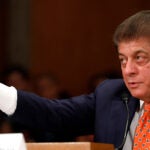 “I talked to Fox News watchers,” he said. “They love this bill.”

The senator and primetime host battled it out. Watch above, via Fox News.