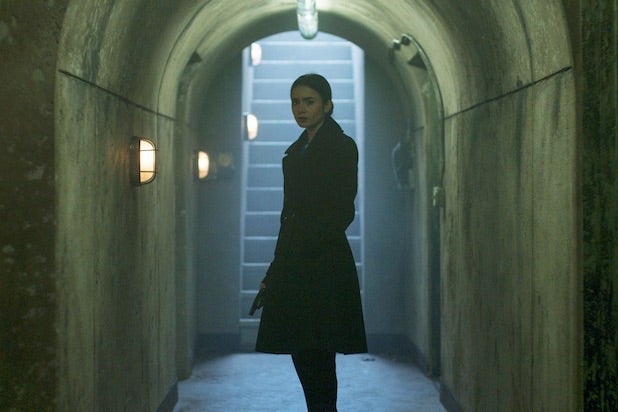 A thriller that wants to be more than that and stretches the bounds of plausibility to get there, “Inheritance” may have you squirming in your seat and shaking your head in equal measure.

The setup has a certain amount of promise, maybe: Imagine the family from “Succession” living in the house from “Parasite,” complete with a guy trapped in the basement. But then forget about comparisons to those estimable projects, because “Inheritance” is really just a clunky potboiler that uses fancy settings to distract from the contrivances on which it is built.

The film from director Vaughn Stein (“Terminal”) was due to premiere at the Tribeca Film Festival and to receive a theatrical release, but it instead debuted on DirecTV on goes demand on May 22, where the presence of Lily Collins, Chace Crawford and Simon Pegg may account for a modicum of interest.

Its first 10 minutes are nervous and jittery, jumping between different moments in the life of Collins, who plays Lauren Monroe, a New York district attorney who makes up for her improbable youth with a severe hairstyle and a perpetually troubled scowl. We see Lauren jogging in Central Park, doing a press conference, holding meetings and attending a campaign rally for her brother; then she learns (from a brusque reporter in the middle of the news conference?) that her father, Archer Monroe, has died of an apparent heart attack. At this point, the opening credits roll and things slow down.

The pace of the film, so frantic at first, gets stately and portentous, gliding through the lavish Monroe estate as people keep telling Lauren, “your father was really proud of you.” They have to remind her of this because he left her only $1 million to her favored brother’s $20 million. But he also left her an envelope, which contains a flash drive video in which he apologizes for burdening her with “a secret you must carry to your grave.”

That secret, she finds out soon enough, is buried in the back yard of the family estate, which encompasses such a huge swath of woods that apparently nobody has noticed the locked metal hatch in the ground. (Hey, it’s covered with an astroturf mat.) Lauren has the key, which it turns out leads to a fully-equipped bunker where a disheveled, feral man with really long hair has apparently been chained to the wall for a very, very long time.

(Later in the movie, we learn that at least one other person probably knew about this all along, which makes all the secrecy in Archer’s video a little odd.)

Rather than calling the cops, which you might reasonably expect the New York D.A. to do, Lauren is determined to find out exactly what’s going on herself. “You’re chained up in a bunker and I want to know why,” she declares to her captive – and to begin to get some answers, she’s up for bribing him with steak, scotch and key lime pie.

The prisoner is played by Simon Pegg under a mound of way-past-coronavirus hair, in what might be the only performance Pegg has ever given with no sense of lightness. (But he sure is good at glowering and acting crazy.) He says his name is Morgan Warner, and he’s been down there for 30 years because he was going to tell the police about a fatal hit-and-run accident committed by a drunken Archer years ago.

Agog at the revelations and increasingly uncertain what to do, Lauren neglects a very important case she’s prosecuting and spends more and more time uncovering her father’s unsavory secrets; the hairdo and the power suits say she’s a professional, but the behavior suggests otherwise. The deeper she gets, the more unsavory the secrets become and the more Lauren has to weigh the value of protecting the family at all costs, an instinct that seems to come naturally to the rest of her family.

You have to wonder if the only reason dad even told Lauren about his basement-dweller was to corrupt her from beyond the grave, but there probably would have been easier ways to accomplish that; at any rate, the implausibilities mount as the plot gets increasingly tangled.

There’s an austerity to the film’s style, which rarely gets too heated or melodramatic as it contrasts the halls of power in which the family lives and works with the seamy little dungeon out back. But the story itself does grow more heated and melodramatic; “Inheritance” acts as if it would like to be a meditation on power and guilt, but at heart, it’s a pulpy thriller in a bespoke suit, a movie that puts its pulp in settings that just might give it more gravity and import.

The cat-and-mouse game between Lauren and Morgan, intermittently diverting but eventually tiring, ends with a twist, a showdown, another twist that you’ve probably seen coming for a while, and a final image that’s striking and beautiful unless you think about it too closely. “Inheritance” is a creepy thriller with delusions of grandeur, perhaps, a movie whose surface sheen can’t hide its seamy silliness.