Teach a man to fish, the saying goes — but if you’re GQ, you teach a man to consume video content at record rates and thrive in the cutthroat digital space.

This year has been a banner one for the iconic Conde Nast men’s magazine, especially in cross-platform video, a category that is increasingly existential for publishers.

Video viewership is up a staggering 218 percent year-over-year as of November, up 165 percent in minutes spent per video viewing and a larger GQ.com unique visitor boost of 9.2 million uniques for the month of September, according to the publication.

Recently-hired Digital General Manager Rob Dechiaro (former EVP of StyleHaul) and ‘s Digital Director Mike Hofman point to both new and old methodology as a reason for the growth.

.com made a very good bet on longtime anchor Keith Olbermann covering politics via his web series “The Closer,” which helped solidify the record numbers (roughly 18 million for the series since its September launch). There’s also a renewed leveraging of ‘s native content — like Ryan Reynolds’ hit viral interview with himself that came from a cover story, and the absurdly fun lifestyle series “Most Expensiveist Shit with 2 Chainz” — that sees GQ drilling down into the tenets of its brand. 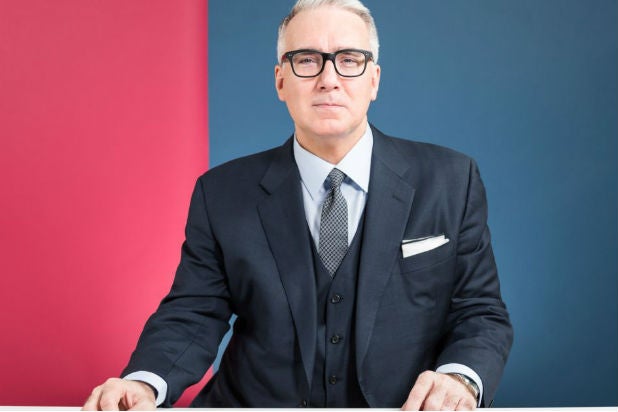 “In broad strokes, we’re programming  as its own network, identifying our user viewing habits and having a smart conversation about how to window our content,” Dechiaro told TheWrap.

Even with fashion coverage,has avoided longer premium offerings (the stock-in-trade of its publisher’s video unit Conde Nast Entertainment, headed by Dawn Ostroff), instead taking its style game to Snapchat and Instagram Stories (the team relies heavily on the millennials in its Midtown Manhattan bullpen, which includes budding social fashion star Jake Wolff, Dechiaro and Hofman said).

The current user skews 75 percent male, in the 18-34 age range, the digital executives said, with programming like Olbermann’s slotting higher in that age range.

Borrowing a term used widely in film distribution, the “window” as it applies to GQ is a matter of “finding multiple lives” for its content. Stories on Kanye West’s fashion collection, the best pair of boots for the office or “covering Trump as an example of how men behave in the world” are being shaped into short-form video in the 20-to-90-seconds range.

The brand also counts recent adaptations in “Granite Mountain ” — which stars Josh Brolin and Miles Teller, lists Ostroff as an executive producer and was based on the magazine’s profile of the 2013 fire — and the Netflix docuseries “Last Chance U.”

“We’re going to see continued growth as we round out our portfolio,” Dechario concluded.

The party had a barely-detectable Midsummer Night’s Dream theme, and came with the generous dim lighting that most LA parties have when they’re done correctly. Except, of course, at the evening’s climax when the hotel patio was so thick with guests that many feared falling into the famed Chateau pool.

That’s when the video crew blasted its lights, got a 360 shot of the crowd and quickly retreated to let the Men of the Year go about their business.