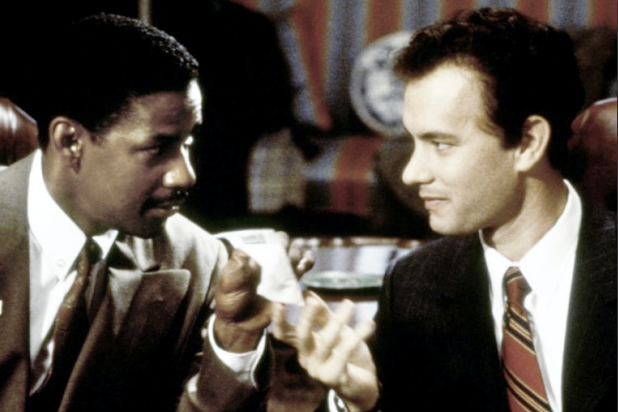 The creators of the “Inside Jaws” podcast are turning their attention to Jonathan Demme’s stigma-shattering “Philadelphia” to mark the 25th anniversary of the Tom Hanks-Denzel Washington drama — and raise money to fight HIV/AIDS worldwide.

The 1993 film helped put a human face on the virus at a time when patients suffered horrific discrimination and ignorance. That is still true in much of the world, and through an arrangement with Coca-Cola, 100 percent of donations made by listeners of the podcast will go to support the (RED) campaign to rid the world of AIDS.

Host Mark Ramsey, who created the podcast with audio designer Jeff Schmidt, told TheWrap that he sought and received the blessing of Hanks, Washington, “Philadelphia” screenwriter Ron Nyswaner, and Joanne Howard, wife of Demme, who died last year at 73.

“I think this is the first podcast built to support a charity like this, and for which two movie stars portrayed in the podcast gave their blessing,” Ramsey said.

“People Like Us: Inside Philadelphia,” a two-part series, will appear Thursday wherever you listen to podcasts, including here, the site for Ramsey and Schmidt’s production company, Wondery.

The series will also be embedded on the donation page for (RED).

“People Like Us: Inside Philadelphia” follows Ramsey and Schmidt’s past podcasts about film history, all of which have focused on horror stories: “Inside Jaws,” “Inside The Exorcist,” and”Inside Psycho.”

The podcast will focus not just on the making of the film, but also on the perceived box-office risk of addressing a subject millions of Americans actively avoided talking about — and the dangers of taking on such an important subject for the first time and mishandling it.

It’s easy to forget the significance of “Philadelphia,” the first mass-market film about HIV/AIDS and how prejudice and homophobia initially kept Americans from fighting the disease with the ferociousness it deserved. It debuted in the same year as another landmark story about the disease, the TV docudrama “And the Band Played On,” based on Randy Shilts’ book.

In her 1993 review of “Philadelphia” for the New York Times, Janet Maslin credited Demme with taking a huge risk by bringing the story to the screen — though she wished it had been bolder. She wrote:

For a film maker who thrives on taking chances, “Philadelphia” sounds like the biggest gamble of all. As the first high-profile Hollywood film to take the AIDS plague seriously, Jonathan Demme’s latest work has stubborn preconceptions to overcome as well as enormous potential to make waves. What it does not have, despite the fine acting and immense decency that give it substance, is much evidence of Mr. Demme’s usual daring. Maybe that’s not surprising: it isn’t easy to leave fingerprints when you’re wearing kid gloves.

“Philadelphia” centers on Hanks’ character, an HIV-positive attorney, who enlists Washington to sue his firm when he’s fired because of his diagnosis. Washington’s character wrestles with his own homophobia in the process.

The film doesn’t have the directness of later films and TV shows that have addressed the AIDS crisis for a wide audience. But it helped open the door to many of those projects. And it changed perceptions by making Tom Hanks — one of America’s most likable movie stars — the face of the mysterious and frightening disease.

Roger Ebert wrote in his review:

“Philadelphia” is quite a good film, on its own terms. And for moviegoers with an antipathy to AIDS but an enthusiasm for stars like Tom Hanks and Denzel Washington, it may help to broaden understanding of the disease. It’s a ground-breaker like “Guess Who’s Coming to Dinner” (1967), the first major film about an interracial romance; it uses the chemistry of popular stars in a reliable genre to sidestep what looks like controversy.

The film also included more than 50 HIV-positive extras who put real faces to the disease, to take audiences beyond the Hollywood story and make them confront the reality of the crisis.

Despite the perceived risks in making the film, “Philadelphia” was a major success: Hanks won a Best Actor Oscar, and Springsteen’s “Streets of Philadelphia” won the Oscar for Best Original Song.

“It’s hard to put our heads back to where they were 25 years ago,” Ramsey said. “And it’s hard for people to know that in 2018, AIDS remains a huge fatal diagnoses in the world for a lot of people who don’t have access to medication, which (RED) is trying to fix.”