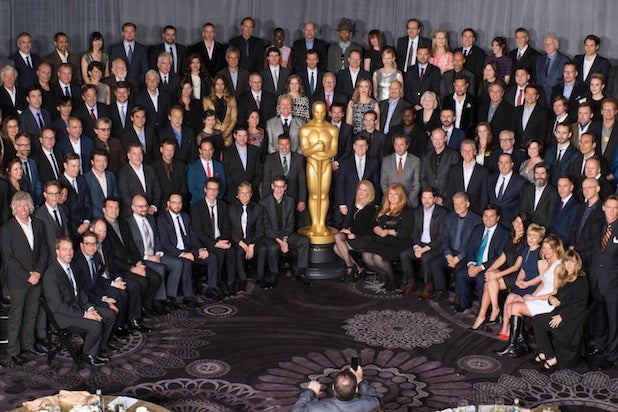 Bono revealed that U2 will be performing on the Oscars, David O. Russell offered Merry Clayton a song in his next movie and Alfonso Cuaron got a chance to tell Spike Jonze how much he loved “Her,” which he hadn’t seen until recently.

Those were some of the things that happened inside the Oscar Nominees Luncheon on Monday, the yearly gathering at which nominees are invited to mingle, make new friends, glory in their nominee-ness and ignore the fact that in less than three weeks, the opening of 24 envelopes will cruelly separate them into winners and losers.

At the lunch, which the Academy has been throwing since the 1980s, nominees are spread out so that nobody sits with anybody in their category or anybody from their film. Among those who came to pose for the annual class photo and receive their certificates of nomination were Meryl Streep, Sandra Bullock, Amy Adams, Cate Blanchett, Matthew McConaughey, Leonardo DiCaprio, Christian Bale and Bruce Dern from the lead actor and actress categories; Jared Leto, Barkhad Abdi, Bradley Cooper, June Squibb and Lupita Nyong’o from the supporting categories; and directors Russell, Cuaron, Steve McQueen, Alexander Payne and Martin Scorsese.

But few of them got as much attention as Bono, the U2 singer who was listed in the program as Paul Hewson but introduced under his stage name when the roll of nominees was called.

“This feels like recess after the oil rig I’ve been working on,” Bono joked to TheWrap about the break he took from the recording of U2’s new album. (His three bandmates stayed on the oil rig, which is to say in the recording studio.)

He also said that while the Academy has yet to announce it, U2 will perform their nominated song “Ordinary Love” on the Oscar show. “It’ll be the only band performance of the song,” he said. “After Mandela died, we didn’t think it would be right to release it as a single, because it would seem like we were trying to capitalize. So we’re going to do it this once – but it’s a pretty good place to do it.”

Bono also said he’d pitched Oscar show producers Craig Zadan and Neil Meron, and former Academy president Sid Ganis, on an idea he has for the red carpet at next year’s Oscars. 2015, he explained, will be a crucial year in the global fight to eradicate AIDS – so he’d like the beginning of the Oscar red carpet to sport a pair of parentheses, the logo of his Red program.

“We have red iPods, red clothes – why not a red carpet?” he said. “We’ll have a camera looking down on the parentheses, and then the stars can all stand in the parentheses and look up.” Ganis, who worked with U2 on the release of the movie “Rattle and Hum” 25 years ago, said he was all for the idea, and Bono said the show’s producers were supportive as well.

Elsewhere at the luncheon, Zadan gave the usual producers’ speech in which he asked the nominees to keep their speeches to 45 seconds or less, and to speak “from your heart, not from a list.”

Added the producer, “I was told not to remind you that there will be over a billion people watching” – a line that he might have been told not to use because the Academy and ABC admitted more than a decade ago that it was a lie, and that the accurate tally of Oscar viewers is the far more modest and vaguer “hundreds of millions.”

When the nominees were called to the riser for the annual photo, Lupita Nyong’o, Matthew McConaughey, Martin Scorsese and cinematographer Roger Deakins were among those getting the loudest rounds of applause, while Pharrell Williams once again took the prize for the biggest hat.

Afterwards, nominees mingled and made new acquaintances – few more excitedly than “American Hustle” writer-director David O. Russell, who was so thrilled to meet singer Merry Clayton, who is featured in the nominated documentary “20 Feet From Stardom,” that he began singing some of Clayton’s lines from the Rolling Stones’ classic “Gimme Shelter.”

He then wrapped Clayton in a big hug and told her that he wanted her to sing a song in his next movie. “I hope you mean it,” she said.

“I do,” Russell insisted. “This is going to happen. I promise!”