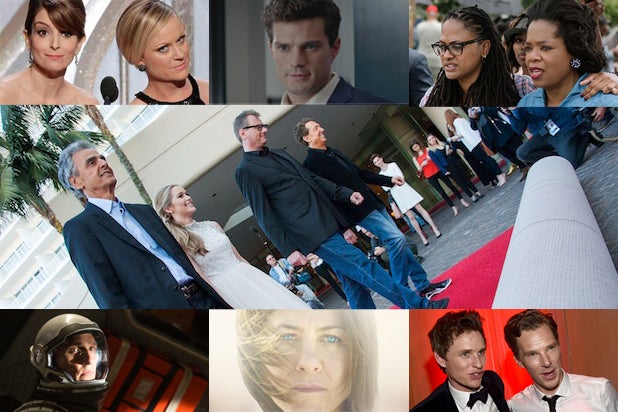 The 72nd Golden Globes will take place on Sunday at the Beverly Hilton Hotel, which is currently in the throes of preparation. We don’t yet know who will win, but we do know there will be jokes from hosts Tina Fey and Amy Poehler, there will be drinking in the audience and backstage, and the word party will be tossed around liberally.

And now that TheWrap has snuck a peek at a rundown for the show, we know a few other things, too. We’re not going to spill the beans on too much of what will transpire, but here are a few things to expect:

1. Tina Fey and Amy Poehler have been given nine minutes for their opening talk. (You can’t call it a monologue, because there are two of them.) That’ll make it the second-longest individual segment on the show.

2. The longest segment, which is scheduled to last nine minutes and 30 seconds, will be the presentation of the Cecil B. DeMille Award to George Clooney.

3. Fey and Poehler hadn’t written the bulk of their material as Globes weekend arrived. Staffers expected them to come up with almost everything in a long, tense session with their writing staff on Saturday, as rehearsals were taking place.

5. The first presenters of the night will be the team of Jennifer Aniston and Benedict Cumberbatch.

6. The second presenters will be a couple from what is presumed to be a very, very hot upcoming movie.

7. Of the six big acting winners from last year – Matthew McConaughey, Cate Blanchett, Leonardo DiCaprio, Amy Adams, Jared Leto and Jennifer Lawrence – McConaughey, Adams and Leto will be back to present the opposite-sex counterpart of their award.

8. Blanchett, DiCaprio and Lawrence will not.

Also read: Golden Globes Predictions: Who Will Win, Who Should Win

9. 16 of the 25 awards will be handed out by two-person presenter teams. Nine will be presented solo.

10. In all but one case, those teams will consist of one man and one woman.

11. After the awards-giving begins with a film category, the next five awards will be given for TV work.

12. The final television award, Best Actress in a TV Series, Drama, is scheduled to be handed out about 40 minutes before the end of the show.

13. The last five awards of the night will be for film.

14. The final award of the night, Best Motion Picture, Drama, will be presented by an eight-time Globe winner, who by the end of the night will have either won or lost in a supporting category.

15. The Best Original Song award will be presented by a pop-music legend who has not been mentioned in any of the press releases listing the show’s presenters.

16. Unlike two years ago, when two of the contenders for best picture brought out real-life heavy hitters to introduce their film clips (“Argo” using former CIA agent Tony Mendez and “Lincoln” countering with President Clinton), all of this year’s film clips will be introduced either by actors who are in the films or actors who presumably have an affinity for them.

17. One film, however, is scheduled to pair one of its actors with a real person who was depicted in the film.

18. Almost all of the awards presentations have been allocated between three and four minutes of air time, though Best Animated Feature and Best TV Series, Drama have been given more than four minutes.

19. Best Screenplay for a Motion Picture, which is being presented by two former “Saturday Night Live” performers who played brother and sister in a 2014 movie, has the longest allocation of any award, almost five and a half minutes.

20. Best Director and Best Motion Picture, Drama, on the other hand, have two of the shortest allocations at less than 2:45.

21. The show will consist of 15 acts separated by commercial breaks.

23. Act 13, which only hands out the Best Motion Picture, Comedy or Musical award and is scheduled to last less than five minutes, is the shortest.

24. Fey and Poehler are scheduled to appear in eight of the 15 acts.

25. If the show runs according to schedule, it will last for three hours and 10 minutes.