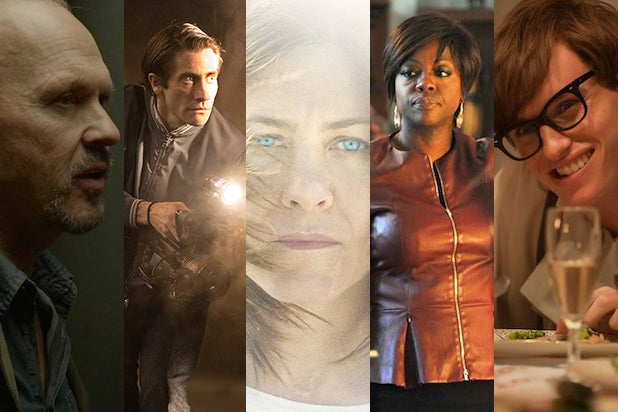 The Golden Globes are chosen by a small group of 80-odd full and part-time journalists in Los Angeles — how hard can they be to predict?

Pretty hard, sometimes. Where the tastes of the 6,000-plus Oscar voters tend to even out and make sense, there’s often something confounding about the priorities and agendas of the Hollywood Foreign Press Association’s motley assortment of voters. But knowing that they like big stars, they like to be on winning teams and they like to spread the wealth to keep everybody happy, TheWrap has taken a look at Sunday’s categories to offer our predictions.

We’ve also indicated what we think deserves to win — though to be fair, these are less proclamations of what should win than suggestions of where our personal votes would go.

(In a healthy majority of cases, by the way, our own choices agree with what we think the HFPA will chose. So as much as we love to mock them, their taste isn’t too bad.)

Best Motion Picture, Drama
The nominees: “Boyhood,” “Foxcatcher,” “The Imitation Game,” “Selma,” “The Theory of Everything”

The scuttlebutt would suggest that HFPA voters might well like Morten Tyldum’s “The Imitation Game” better than they like Richard Linklater’s “Boyhood”; the question is whether they will go with their taste, or opt for the film that feels more eventful this year. But the fact that Linklater got a best director nomination and Tyldum didn’t gives the edge to “Boyhood” – which, to my mind, feels historic and fresh in a way nothing else does.

Gyllenhaal would be a delicious kick and Oyelowo an emotional moment, but I don’t see these voters resisting the transformative work done by Eddie Redmayne. As far as who’d get my vote, I’m this close to saying Gyllenhaal, who gave me the creeps on an epic scale. But I can’t resist Redmayne, either.

Will win: Eddie Redmayne, “The Theory of Everything”
Should win: Redmayne

Probably more than at the Oscars, Jennifer Aniston has a real shot at swiping this award out from under favorite Julianne Moore. The HFPA really loves big stars; plus, Moore won a Golden Globe a couple of years ago for “Game Change,” so they don’t have that “we owe her” thing that will help her at the Oscars, where she’s 0-for-4. Still, Moore’s performance is quietly undeniable – and the voters reportedly love her in “Maps to the Stars,” so this will be a way to recognize two performances.

Unless the voters indulge in their love of big musicals and give an upset victory to “Into the Woods,” or love Wes Anderson more than we know and give it to “The Grand Budapest Hotel,” this should be a relatively easy win for “Birdman.” It may be too weird for a number of the more conservative voters, but it has an unmistakable energy and originality that makes it one of the key movies of 2014, and the HFPA should realize that.

Moore was a hoot in David Cronenberg’s viciously dark comedy “Maps to the Stars,” but she can’t go home with two awards, right? Blunt is the star of a big musical, and Globe voters tend to love big musicals. Adams took a tricky role that could have put her in the shadow of her co-star, and became the luminous heart of her film.

Will win: Emily Blunt, “Into the Woods”
Should win: Amy Adams, “Big Eyes”

Only one of these men would have been made the cut if the Globes combined the drama and comedy acting categories the way the Oscars do.

How could I ever vote against my favorite contemporary actress, Jessica Chastain? Just this once, I guess I would, because Patricia Arquette makes a powerful case that “Boyhood” could just as easily have been called “Motherhood.” Voters will likely resist their own urges to give Meryl her ninth Globe and agree.

Simmons has been a juggernaut through the critics’ awards; his is a bandwagon that Globes voters will want to be on. I might be inclined to vote for Hawke or Ruffalo just to be different.

Also read: ‘Whiplash’ Villain JK Simmons: ‘I Have No Illusions About Being a Movie Star’

Last year, the flashier movie won for director (Alfonso Cuaron for “Gravity”) and the more potent drama won for picture (“12 Years a Slave”), and this year voters could easily go the same way and opt for Alejandro Inarritu for “Birdman” over Richard Linklater for “Boyhood.” For me, this is a brutally tough choice between the guy who made a movie two weeks at a time for 12 years and the one who made a two-hour film appear to be one continuous shot.

Films with multiple nominations tend not to be shut out at the Globes, which means this could be a category in which the voters can reward “The Imitation Game” or “The Grand Budapest Hotel.” I’d reward “Boyhood” for sketching a life in small moments.

This one really could go to any of the nominees, but the way the “Birdman” drum score drives that film – and the ability to stick it to the Academy, which disqualified the score – could make the difference.

Best Original Song
The nominees: “Big Eyes” from “Big Eyes,” by Lana Del Rey and Dan Heath; “Glory” from “Selma,” by John Legend and Common; “Mercy Is” from “Noah,” by Patti Smith and Lenny Kaye; “Opportunity” from “Annie” by Greg Kurstin, Sia Furler and Will Gluck; “Yellow Flicker Beat” from “The Hunger Games: Mockingjay – Part 1,” by Lorde

“Glory” and “Big Eyes” both work brilliantly in their films, and I’m guessing the former wins narrowly. But if I had a vote, I would do everything in my power to make sure that the unstoppable, eloquent and essential Patti Smith walked onstage at the Golden Globes.

Best Animated Feature Film
The nominees: “Big Hero 6,” “The Book of Life,” “The Boxtrolls,” “How to Train Your Dragon 2,” “The Lego Movie”

The deserving frontrunners are “Big Hero 6” and “The Lego Movie,” though “Dragon” may have an outside shot. I’d give my vote to the latter, but I think Globe voters will go for the less meta pleasures of the former.

In a strong field, I’d go with the massive, overpowering and brutally dark “Leviathan.” But I expect voters to go with something a touch friendlier, either the probing character study “Force Majeure” or the austere but stylish “Ida,” by far the biggest hit of the field.

Will win: “Ida”
Should win: “Leviathan”

The HFPA loves to be ahead of the curve, but “The Affair” won’t win this year. It was buzzy, but wasn’t for everybody. And although “The Good Wife” is a strong contender, I feel network shows aren’t getting the votes. This is a race between “Downton Abbey” and “House of Cards.” In the end, the Netflix offering had a stronger season.

Best Actress in a Television Series, Drama
Nominees: Claire Danes, “Homeland”; Viola Davis, “How to Get Away With Murder”; Julianna Margulies, “The Good Wife”; Ruth Wilson, “The Affair”; Robin Wright, “House of Cards”

Claire Danes and Julianna Margulies are deserving, but are probably not that exciting for HFPA voters these days. Hands down, this race is between Viola Davis and Robin Wright, who has already won a Globe for this role. It would’ve been nice to have “Scandal’s” Kerry Washington in the mix here, but I already told you how I felt about that snub. In the end, Davis had a stronger turn as multi-faceted attorney and professor Annalise Keating. It would also be a historic move to name Davis the winner. They didn’t give it to Washington last year, but Davis’ role is much more dynamic than Washington’s and she took her wig off.

Will win: Viola Davis, “How to Get Away With Murder”
Should win: Davis

The real battle here is between Spader and Spacey. Both have been nominated twice for their present roles on NBC’s “The Blacklist” and Netfix’s “House of Cards,” respectively. There has been a groundswell of support for Spader in the industry, which believes his work on “Blacklist” has been constantly under appreciated and the HFPA may bend to the pressure.

Will win: James Spader, “The Blacklist”
Should win: Kevin Spacey, “House of Cards”

Here again the HFPA proves that it isn’t afraid to make a big swing for new offerings. Because of that, “Jane the Virgin,” “Silicon Valley” and “Transparent” would be their top choices. It will ultimately go to the deserving and highly original “Transparent,” which would also mean a first win for Amazon. That’s enough to make it a shoo-in.

Sorry, Lena Dunham and Edie Falco are yesterday’s news. Taylor Schilling suffers from being surrounded by a much more talented supporting cast. That leaves newcomer Gina Rodriguez and perennial favorite Julie Louis-Dreyfus. I think the HFPA will land on Rodriguez, a new talent who’s also Latina. Check and check.

This race is a snore-fest with some of the same old picks of yesteryear, except for Jeffrey Tambor. His win in this category is undeniable. Not only is he a fresh name, but he’s a strong contender for an Emmy in this transformative role. And the HFPA loves to be first.

This is a fight between “Fargo,” “True Detective” and “The Normal Heart.” For all its brilliance, “Normal Heart’s” buzz doesn’t have the legs that the minis do. “Fargo’s” Emmy win has something to do with that. But, “True Detective” has been championed by many in the industry and a very strong fan following. In the end, I think the HFPA will go with, um, this is a tough one…

Will win: “True Detective”
Should win: “The Normal Heart”

This is the most competitive category of the TV Globes. Maggie Gyllenhaal, Frances O’Connor and Frances McDormand certainly delivered very strong performances. Jessica Lange and Allison Tolman are high on my list, as well, for the uniqueness they brought to their characters. I think the HFPA will probably go with McDormand’s gritty portrayal of a woman in the depths of painful depression.