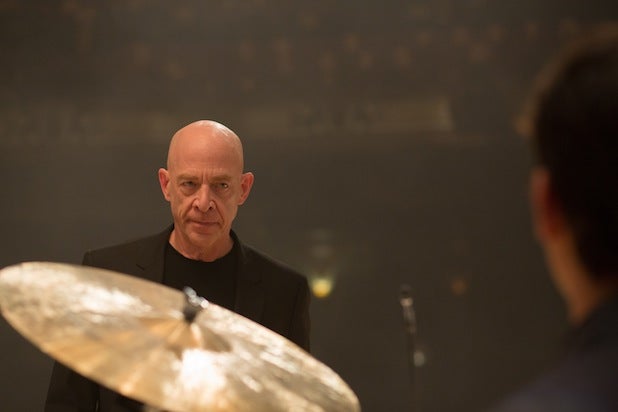 J.K. Simmons has been in hundreds of films and TV shows over a flourishing two-decade year career as a character actor, but he’s rarely been able to sink his teeth into a part as juicy as the one he has in Damien Chazelle’s “Whiplash.” Playing a brutal music teacher in the Sundance hit, the guy who might be best known as a neo-Nazi skinhead convict in the HBO series “Oz,” Juno’s dad in Jason Reitman‘s “Juno” and Peter Parker’s editor in Sam Raimi‘s “Spider-Man” movies has put himself in unexpected company: among the leaders in this year’s Best Supporting Actor sweepstakes.

Simmons’ Terence Fletcher is the leader of the top jazz band at a prestigious music school, but he’s also a psychopathic beast who berates his musicians, spews often-homophobic invective and doesn’t shy away from throwing physical abuse into the bag of tricks he uses as motivation. He’s fierce, ferocious and even occasionally funny, and he makes life a living hell for Andrew Neyman, a young drummer played by Miles Teller in the Sony Pictures Classics film, which opens in limited release on Friday.

And while the 59-year-old Simmons himself is sharp and generally amenable, he clearly enjoys playing a hardass every so often: When I walked into a Beverly Hills hotel room to interview him, he was watching a baseball playoff game between the Detroit Tigers and Baltimore Orioles. Knowing Simmons was born in Detroit, I casually remarked, “I assume you’re a Tigers fan.”

“You’re right,” he snapped, with only a slight grin. “But what if I was an Orioles fan? Then you’d really be getting this interview off to a bad start.”

TheWrap: “Whiplash” premiered at Sundance, then it went to Cannes and Toronto … By this point, I’m thinking that you’ve probably spent more time talking about it than you spent working on it.
J.K. Simmons: Probably so, especially since we shot it in 19 days. Which is crazy fast, especially for a young filmmaker.

[Pauses.] You know what? Now that I’ve said that, I’m not sure, because young guys aren’t used to having the luxury of money and time. Maybe it was more like film school for Damien, knocking it out.

Did it feel rushed when you were doing it?
I’ll tell you what: It felt rushed, sort of, when I looked at the call sheet and saw how much we were compelled to do on a given day. But honestly, when we were doing the work, there wasn’t time to waste, but there was a level of exhilaration. So no, I didn’t feel rushed.

You know, it might be different if somebody’s smart enough to give Damien 10 times this budget to make a movie — he might turn out to be a director who likes to do 15 takes. But he was so thorough and super prepared, and he had everything storyboarded. That was partly because of the nature of this movie, being so musical and so rhythmic that he really had to prepare.

It’s musical and rhythmic — but the music is jazz, which is all about improvisation. If you can’t play with it a little bit, what’s the point?
Exactly. And that was the vibe on the set, too. What drew me to it was what was on the page, which was brilliant and thorough and complete. But Damien also gives you the leeway and the freedom to make it your own.

So what’s in the movie that wasn’t on the page?
Umm … I think when I call him a self-righteous little prick, I believe that was out of my mouth. [Grins.] I was just looking at Miles and thinking, you little f—er. Most of those streams of creative awful insults were pretty much mostly right off the page. But that, for some reason, sticks out to me as something that was never on a page anywhere.

Also read: Miles Teller on Lending Clothes to One-Night Stands: ‘You Will Not Get That Sh-t Back’ (Photos)

Damien made “Whiplash” as a short film first, with you playing the same role. At that point, did you wonder if this kid could pull off a feature?
Yeah, absolutely. That’s a leap of faith. With a young director — and of course, to me, almost everybody’s a young director now — but with an inexperienced writer-director, you always wonder. But I’ve done those before — I mean, the first time I worked with Jason Reitman, it was his first feature.

You read the script and you think, yeah, well, this guy’s brilliant. He totally gets it, he knows how to put it down on the page. He went to Harvard Film School, so obviously he’s got at least a solid education in the basics of how to put a movie together. But can he direct?

And actually, I saw enormous growth just in the year between when we worked on the short and the feature, I think largely because of self-confidence on Damien’s part. When we shot the short, I tried to address this a few times with him in private. I told him, “You don’t need to have any deference to me. Just direct. Tell me what to do — I’m the actor, we’re here to collaborate.” And when we were making the feature, there was a level of just confidence that he exuded that was fun to see.

You studied music yourself, didn’t you?
I have a degree in music, yeah, from the University of Montana. I studied voice and composition and conducting and all that. And when Damien and I first met, he said, “I don’t want you to worry about the conducting. We’ll have a technical advisor there to help you look like you know what you’re doing.” And I said, “Well, I actually do know what I’m doing.”

I asked them to send me the music once I was on board, and of course they sent me mp3s. [Laughs.] And I was like, “No, send me the music. I want to read the score.” It was fun to exercise those muscles that I haven’t exercised in a long long time.

Also read: TheGrill: Ron Meyer on ‘Why You Don’t Have to Be an Asshole to Survive’ in Hollywood (Video)

Damien has said that the character was inspired by a particular music teacher he had. Did he talk to you about that guy?
A little bit, but I wasn’t interested in mining specific details, you know? I wasn’t playing that guy, I was playing Terence Fletcher. [Pauses.] I was originally playing Julian Fletcher, and he became Terence Fletcher for legal reasons. That’s always interesting to me, that names have to clear.

He’s a fascinating character, because there’s a scene late in the movie where he kind of explains to Miles’ character why he’s so tough. But later, and I don’t want to get too specific about this, we find that what we thought was confession might have just been a ploy.
It is and it isn’t. He is sort of explaining his philosophy, and nothing that Fletcher says in that scene is untrue. And the fact that there’s this Machiavellian thing going on there was not even at the forefront of my mind most of the time.  Even though it had an extra sort of evil motivation, I wasn’t making it up. I was speaking the truth.

Another very busy character actor, Judy Greer, has said that when people come up to her on the street and say, “I know you,” she can usually figure out what they know her from before they tell her. Is it the same for you?
I know what she’s saying. And sometimes you can, yeah. When I go back to New York all these years later, I’ll walk down Seventh Avenue, and I’ll hear, “Yo, Oz!” In New York, I get recognized for that all the time.

Also read: Judy Greer: Forget About the Best-Friend Roles – Now She’s an Author and an Ape

So I can suss it out sometimes. But other times somebody will come up to me because they’re in love with a video game that I did a voice for. I had a guy come up to me a couple of months ago, who knew my name — which, as with Judy, Is not always the case — and he said, “I loved you in ‘Das Barbecu,'” which was an Off-Broadway musical that I did in 1994. I was like, awesome, man. Hundreds of people saw that.

You’ve done 20 years of supporting parts. Do you ever get a strong urge to play leads?
Well, I’ve had a lot of great supporting parts. And honestly, I’ve got a wife and kids, so I like spending time at home. I just did a TV show this past year where I was number one on the call sheet [“Growing Up Fisher”], and I was working 60 hours a week. And it was a good show and I enjoyed it, but at the end of the day I was like, this is a lot of work.

Generally, I like being the supporting guy. And that was obviously part of the joy of doing “Whiplash,” because this is just a bigger supporting part than usual. But I have no illusions about being a movie star. I’m just glad to be able to work. To be able to do the short and then do the feature a year later, and then to be sitting here in whatever fancy hotel this is talking about it has been a pretty cool journey.

[Shrugs.] And the movie’s not even open yet. I mean, I hope people see it.