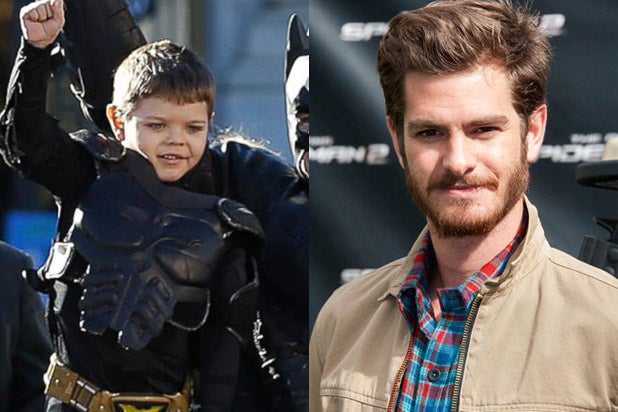 “Spider-Man” star Andrew Garfield‘s unease with the script for a planned Oscars segment with “Batkid” Miles Scott largely led to the cancellation of the appearance altogether, a person who observed rehearsal tells TheWrap.

During Sunday night’s telecast, Garfield was supposed to make a special presentation with Scott, a five-year-old cancer patient who earned the nickname Batkid after the Make-A-Wish Foundation and the city of San Francisco granted him an elaborate day of superhero role-playing in November. However, two sources who were present during rehearsals say Garfield showed up with a re-written version of the speech he’d been given, complaining that the original was exploitative.

The show’s producers then requested that he revert back to the original text, a request to which the actor did not immediately respond.

Sony intervened to keep its “Spider-Man” promotion on the show — and Garfield acquiesced to use the original script at the last minute — but the Academy and the producers decided to cut both the actor and the young child from the show, replacing them with a simple speech given by “Captain America” star Chris Evans.

According to TheWrap’s insider, Sony was unhappy that they were losing the opportunity to promote their summer tentpole, prompting calls to the Academy about the scrapped segment.

Earlier on Thursday, the Academy released a statement saying that the segment was cut in deference to the show’s long running time, but additional accounts from Oscar rehearsals suggest that Garfield’s reluctance to do the segment as written did have significant impact on the decision to kill the segment.

Garfield and Scott visited Disneyland together on Monday, according to both the Academy and a follow-up report by TMZ.

Later, in a statement to E!, Garfield corroborated the Academy’s version of events:

“In full collaboration with the Academy and the show writer, Andrew prepared a segment for the Oscars to honor Miles Scott as the true hero that he is. At some point overnight on Saturday/Sunday morning, it was decided by those running the show that the segment didn’t work in the ceremony. They decided to pull it–Andrew and Miles were equally upset. The producers arranges for Miles and his family to visit Disneyland on Monday and Andrew drove down to visit them and to bring Miles a personal gift. Andrew did the right thing for Batkid and anyone saying otherwise is flat out lying.”