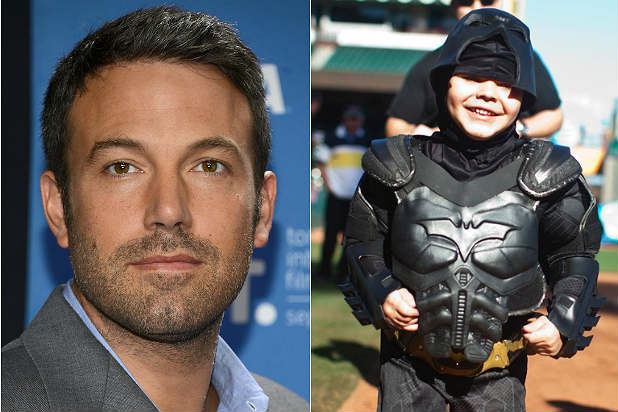 Ben Affleck doesn’t have to try to be the best Batman ever when “Batman vs. Superman” hits theaters in 2015, because 5-year-old Miles Scott already is.

Affleck joins “Dark Knight” star Christian Bale — and the rest of the country — in praising the Make-A-Wish Foundation’s efforts to turn San Francisco into Gotham City for a day so that a young cancer patient could live out his dream of being his favorite superhero.

Scott was cheered on by thousands of locals on Friday as he participated in an epic role-playing scenario, in which he responded to a call from Police Chief Greg Suhr asking for help apprehending the Riddler. But that was only the beginning of a long day for the young hero.

A flashmob of volunteers alerted Batkid that the Penguin had kidnapped Lou Seal, the San Francisco Giants mascot. Accompanied by Batman, Batkid toured the city on foot and in a black Lamborghini Batmobile before finally saving the day — and Seal — at AT&T Park.

The fun event catered to Scott attracted so much attention from all over the country, that  the Make-A-Wish Foundation’s website crashed from the unusual amount of traffic.

Affleck’s praise on Saturday is only the latest in a long line of Hollywood endorsements, including a message from President Barack Obama.

Also read: Kevin Smith on Ben Affleck’s ‘Batman’ Costume: ‘You Have Not Seen This Costume On Film Before’

Warner Bros. announced in August that Affleck, who won his second Oscar last year for producing Best Picture of the Year “Argo,” would portray Bruce Wayne in the “Man of Steel” sequel.

Fans of the long-running franchise and DC Comics character were not happy with the casting decision. However, after a lengthy debate on the internet, most seem to have accepted reality, and moved on.

While Affleck had a number of supporters, too, including lifelong friend Matt Damon and superhero superfan Kevin Smith, perhaps it was Affleck’s own reaction to the backlash that silenced the haters.

“I handle shit, you know what I mean – I’m very tough,” Affleck joked during an interview with Jimmy Fallon. “So I saw the announcement I look at the first comment and it’s like ‘Ben Affleck is going to be Batman’ and the first one goes ‘NOOOOOOOOOOOOOO!’

Affleck will star opposite Henry Cavill as Superman, and might even get a sidekick this time. TheWrap exclusively reported last week that “Girls” star Adam Driver has emerged as the frontrunner to play Batman’s crime-fighting partner Dick Grayson.

Those fearing another “Batman & Robin” disaster can relax, though. Sources familiar with the project have said Driver would play an older version of Grayson, a.k.a. Nightwing — one of Batman’s masked associates who has yet to be portrayed on the big screen.

See video: ‘Batman Vs. Superman': Watch Gotham and Metropolis Duke It Out on the Football Field (Video)

“Batman vs. Superman,” director Zack Snyder’s highly-anticipated follow-up to “Man of Steel,” is set to make a splash at the box office on July 17, 2015.

It’s then that fans of the character will actually be qualified to judge Affleck’s ability to play Batman. Until then, we’ll just have to take Affleck at his word that he won’t top Batkid.