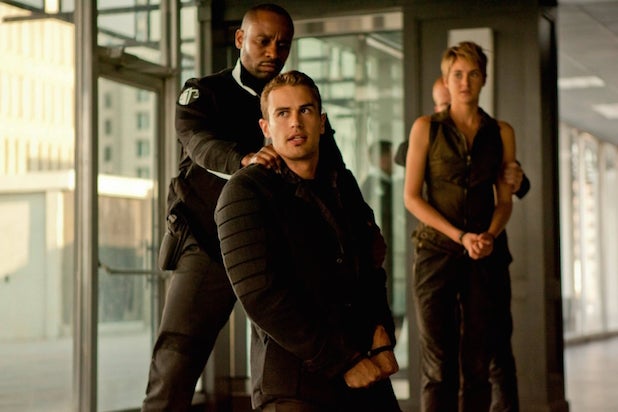 TheWrap‘s Alonso Duralde called the film the next adventure in “YA cinema’s most generic franchise,” and complained of far too many similarities with other hot studio properties, including “The Maze Runner,” “The Hunger Games” and “The Giver.”

“Take everything annoying about a cobbled-together, overly familiar YA adaptation, add the built-in wheel-spinning of a sequel, and you’ve got “Insurgent,” a film that works best when it places its heroine inside virtual-reality situations — at least then it has an excuse for eschewing logic and context,” Duralde wrote in his review.

The majority of critics aggregated on Rotten Tomatoes agreed the second installment in the franchise, built to last four movies (despite being based on a trilogy of Veronica Roth novels), isn’t as good as the first — which the majority didn’t think was much better. With 110 reviews in the can so far, “Insurgent” has garnered a 34 percent “rotten” approval rating.

In this adventure directed by Robert Schwentke, Shailene Woodley‘s character Tris and Theo James‘ Four are now fugitives on the run, searching for allies and answers in the ruins of a futuristic Chicago.

“The nicest thing you can say about ‘Insurgent’ is that no one involved in the making of it would test positive for the intelligent Erudites, but then author Roth has, perhaps out of spite, reframed smart as evil,” Nicholson wrote. “‘Insurgent’ is so vapid it seems impossible that there’s enough story left for another sequel, yet the filmmakers have already budgeted the first movie’s $288.7 million haul for a third and fourth installment. If only they’d spent a few bucks on the latest Merriam-Webster.”

“Improvement, however slight, can be detected as ‘Divergent’ morphs into ‘Insurgent’ onscreen,” Travers wrote. “There’s less exposition, more action and a discernible spark in the acting that was missing before. But let’s face it, the trilogy of young-adult novels that Veronica Roth cooked up to rival The Hunger Games never loses the stale odor of also-ran.”

Seattle Times critic Soren Anderson only recommended the movie for fans of Roth’s novels or the first film. Otherwise, “you won’t have the faintest idea what’s going on in this movie.”

“I have read the novel and seen ‘Divergent’ — twice! — and yet still found ‘Insurgent’ barely comprehensible,” Anderson wrote. “‘Will someone please tell me what’s going on?’ Tris cries at one point, and she could be speaking for the audience as the plot becomes ever more muddled. Bottom line: for hard-core fans only.”

“They’ve made ‘Insurgent’ into less of a youthful romance and more of an action-heavy science fiction story, the kind of rat-a-tat tale that used to star grown-ups before teens ruled the box office,” Turan wrote. “The result — though admittedly it’s a low bar to clear — is a more effective, adult-friendly film than its predecessor.”

Detroit News critic Tom Long suggested that, for once, the movie might actually be better than the book on which it is based.

“Most of the story’s weaknesses and clumsy turns come from the original novels written by Veronica Roth, although a trio of screenwriters have smoothed many of the ragged edges,” Long wrote. “Still, the action sequences are well done, some of the visuals are spectacular, and at it’s heart ‘Insurgent’ is wrestling with some very basic questions about ambition and human interaction. In the long run this franchise will always play second fiddle to ‘The Hunger Games,’ but at least it has a fiddle to play.”