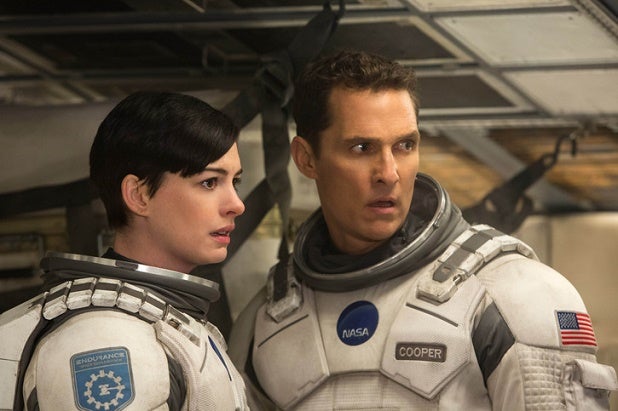 Christopher Nolan‘s “Interstellar” rocketed to $1.35 million at the box office in its first day of release, a series of exclusive screenings Wednesday, and received a major boost from IMAX showings.

The space epic launched Tuesday night at 8 p.m. in 77 markets nationwide in 249 theaters. Forty-two were IMAX screens — which accounted for 62 percent of Wednesday’s haul — and the others were in the 70 and 35 millimeter film formats that the director champions.

The final figures were slightly under the $1.5 million that U.S. distributor Paramount Pictures has projected late Wednesday, and the per-screen average was roughly $5,421. But the Matthew McConaughey space epic may have been a victim of its own popularity, with many sellouts reported at the IMAX locations. The lMAX sites brought in $840,000, for a very strong $20,000 per screen.

“We sold out about half the shows,” IMAX President Greg Foster told TheWrap. “I wish we had more seats.”

They early shows Wednesday and Thursday will provide a springboard for “Interstellar” going into this weekend’s showdown with Disney Animation’s “Big Hero 6.”

Disney has landed “Big Hero 6” in a very healthy 3,761 theaters, around 3,100 of which will be 3D. “Interstellar” wasn’t shot in 3D — Nolan is not a fan — and will be in roughly 3,500 theaters, 369 of which will be IMAX. Whether the upcharges from 3D will benefit “Big Hero” more than the giant-screen premiums do “Interstellar” will have a lot to do with who claims weekend bragging rights.

Both films are expected to take in more than $50 million in a very close race.