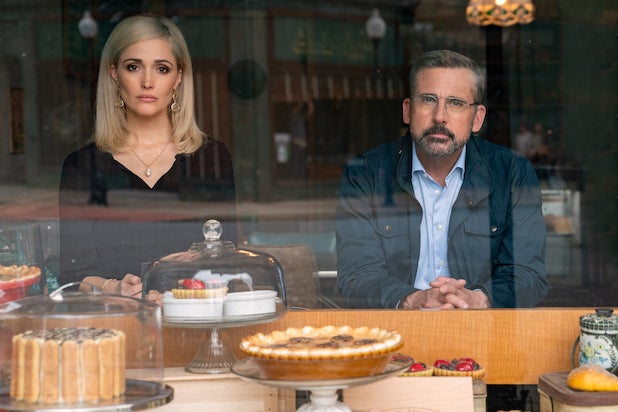 There was a time when Jon Stewart was clearly one of the sharpest comic minds on TV, and also one of its most astute political voices. And maybe if Stewart’s new movie, “Irresistible,” had come out at that time, it too would feel timely and trenchant.

But things are different now than in Stewart’s heyday, which came in the first 15 years of this century when he was hosting “The Daily Show.” And while it wasn’t that long ago that Stewart was an essential part of political discourse, the world has undergone such seismic changes that a comedy about how crazy elections are may feel out of touch and even curiously tame by the time it comes to VOD and some theaters on Friday, June 26.

Sure, “Irresistible” gets some laughs as it tars both Democrats and Republicans with the same brush, and it slides in a few effective shots at the absurdity (and danger) of our system of campaign finance. But while Stewart highlights the word within the word when his film’s title, “IRRESISTIBLE,” appears on the screen at the end of the movie, that’s not enough for this comedy starring Steve Carell to feel current, or even to feel as vital as an average weeknight on “The Daily Show.”

Also Read: Jon Stewart on Black Lives Matter Protests: 'Every Advancement Toward Equality Has Come With the Spilling of Blood'

Stewart’s second film after his debut with the dark Iranian-set drama “Rosewater,” “Irresistible” is a more familiar turn for a man known for comedy. Carell stars as Gary Zimmer, a Democratic political strategist who comes out of his post-Trump depression when he sees video of a Wisconsin farmer (and former Marine Corps colonel), Jack Hastings, blistering his small-town city council for not taking care of the neediest among them.

Gary figures that Jack is just what the Democrats need to become relevant again. (He’s “Bill Clinton with impulse control,” or “a church-going Bernie Sanders with better bone density.”) So he persuades the reluctant Colonel Jack to run for mayor, which Jack says he’ll do only if Gary himself stays in town and runs the campaign.

So Gary finds himself trying to stage-manage recalcitrant cows, dealing with nonexistent wifi and obliviously ordering Budweiser and burgers at a local joint that specializes in German beer and bratwurst. His efforts stir up enough attention that Gary’s arch-enemy and occasional lover, Republican operative Faith Brewster (Rose Byrne), comes to town to head up the incumbent mayor’s re-election campaign.

It all gets vicious and dirty and occasionally funny, though Stewart is at least as interested in pointing out how stupid our political process is than in getting laughs. When Gary turns a few campaign volunteers into the heads of Super PACs and moves them to the back of the room because they’re not supposed to interact with the campaign, the chuckles are slight but the civics lesson pointed.

Gary and Faith are James Carville and Mary Matalin on steroids, with a bit of Kellyanne Conway thrown in. They’re both accomplished liars who’ll stop at nothing to get their man elected – and the difference between them, figures Jack’s daughter, Diana, is “When they go low, we go almost as low but feel worse doing it.”

That comment comes toward the end of the film, when the election heats up, the dirty politics get dirtier and the media gets more craven. But in the age of Donald Trump, it all seems pretty quaint, even though Stewart is essentially taking aim at the system that got Trump into office. “The way we elect people is terrifying,” says one character, “and it’s driving us all insane.”

And that’s far from the only barbed comment of its kind in “Irresistible.” The last 20 minutes of the film are full of double-crosses and surprises, but they’re even more full of the kind of position statements and diatribes that make more sense in a monologue from the “Daily Show” desk than from the mouth of a character in a comedy.

Then again, Stewart’s whole career is based on the idea that political commentary and humor go together. Yes, they do – but as “Irresistible” shows, they do it better when they’re in the moment. That’s the advantage of a nightly TV show over a feature film that can feel like last year’s news by the time it hits your (local or home) screen.