You might have heard that Elizabeth Taylor loves the Michael Jackson movie “This Is It.”

Loves it to a batty degree. To a “the single most brilliant piece of filmmaking I have ever seen” degree.

Loves it so much that she went on Twitter and posted 18 consecutive tweets on Monday gushing about the movie.

And, oh yeah, she thinks it should be nominated in “every category conceivable.”

Which got us thinking: exactly how many Oscar categories are conceivable?

(We’re dealing with theory here, not reality; in truth, it won’t be eligible anywhere unless Sony submits it.) 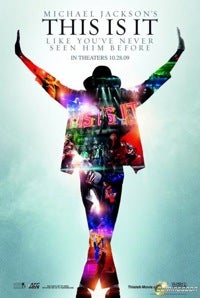 Original screenplay: There’s no rule against getting a nomination for writing a documentary, and it happens at the WGA Awards every so often. But the Oscars just don’t do it.

Adapted screenplay: Adapted from what? Nope.

Editing: Yes. Probably not the worst category in which to mount a campaign, if Liz’s raves bear any connection to reality.

Cinematography: Since it’s assembled from rehearsal footage that was shot by many different cameras, there probably isn’t a single cinematographer responsible for enough of it to qualify.

Animated feature: Nope. No matter how much of Jackson was artificial, he was not animated.

Art direction: Can you be nominated as the production designer of a stage show if that show then becomes a movie, but your designs were for stage rather than film? Unlikely, but it’s up to the Academy’s art directors branch.

Costume design: See above. A committee of costume designers from the art directors branch has final say.

Makeup: Let’s see – the AMPAS definition is “any change in the appearance of a performer’s face, hair or body created by the application of cosmetics, three-dimensional materials, prosthetic appliances, or wigs and hairpieces, applied directly to the performer’s face or body.” I think we have a winner!  Except that stuff was all done in the service of real life, not the movie …

Song: The fact that the “new” song, “This Is It,” turns out to have been co-written in 1983 by Jackson and Paul Anka is a pretty reliable indication that no songs were written for the movie. In fact, they couldn’t have been, because there wasn’t a movie when the footage was shot.

Score: Even if there’s original music composed to fill the spaces between Jackson’s songs, there’s probably not enough of it.

Documentary feature: Maybe next year. To allow time for the multi-level judging process, the documentary eligibility period began September 1, 2008 and ran through August 31, 2009, with an extension to September 31 granted to some films. Without a seven-day run in L.A. and New York during that time, a film isn’t eligible.

In other words: sorry, Liz, but it’s not eligible for much in these parts.

Maybe you’ll have better luck with the Grammys.