With two days left to submit films for the Oscars foreign-language category, most of the countries planning to compete have already made their selections. But a few more come in each day – and today, we’ve got three more competitors, including a big-budget but widely-derided epic from Italy and the film that Spain snubbed Pedro Almodovar to pick. 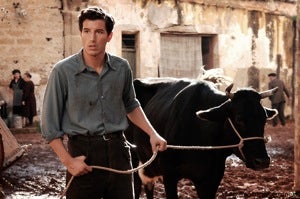 Italy: “Baaria,” a $37 million, generations-spanning drama from Giuseppe Tornatore, who directed the Oscar-wining foreign film “Cinema Paradiso” in 1989. Reviews were not kind at the recent Venice Film Festival, though the film’s sentimentality may well play better among Oscar voters than European critics, who would have preferred Marco Bellocchio’s “Vincere.” (Variety story) (Photo: Film-Szenebild)

Spain: “The Dancer and the Thief,” a romantic drama from former winner (for “Belle Epoque”) Fernando Trueba. Spain’s film board raised eyebrows when it omitted Pedro Almodovar’s “Broken Embraces” from its shortlist, and “The Dancer and the Thief” is a Spanish-Argentinian co-production with enough creative input from South Americans that some have questioned its eligibility.

Australia: “Samson and Delilah,” an aboriginal drama from director Warwick Thornton. It won raves at Cannes, Telluride and Toronto – and while some of the film is in English, apparently enough is in the Walpiri language to make the film a rare qualifier from Australia.

Other recent choices include “Grandfather is Dead” from the Philippines, “Alive” from Albania, “The Secret in Their Eyes” from Argentina, “Donkey” from Croatia, “Protector” from the Czech Republic, “Reykjavik-Rotterdam” from Iceland, “Wingless” from Macedonia, “Ward No. 6” from Russia, “Forever Enthralled” from China, and “Ajami” from Israel.

The Odds’ main roundup of foreign-language submissions is here.